Click on the image and go to https://vimeo.com/758559921  to see the weekly video in which Mike Elerath, Bill Roller, and Keller Williams Realtor Michael Harding discuss the financial markets and real estate. 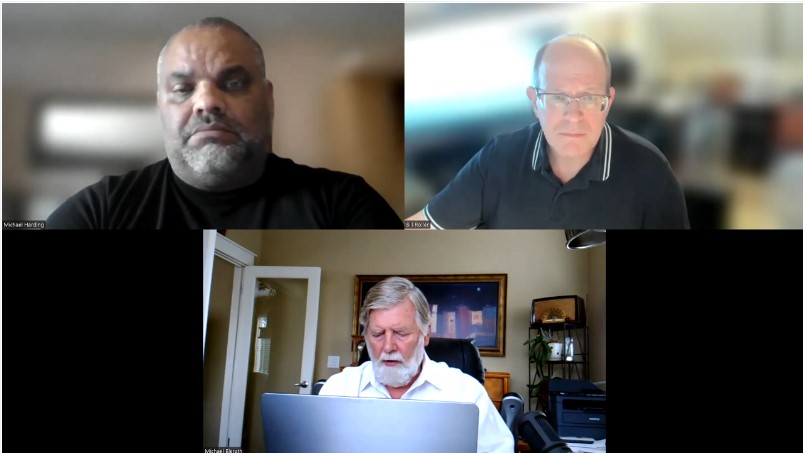 Economic data for the week included the ISM manufacturing index falling further than expected, while ISM services were little changed and remained expansionary. A variety of labor statistics came in generally positive, at least enough so for markets to believe the Federal Reserve will remain hawkish in upcoming policy meetings.

(-) The ISM manufacturing index for September fell by -1.9 points to 50.9, the lowest reading since the early pandemic in May 2020, and below the 52.0 expected. While production ticked up by a few tenths, new orders and employment declined by several points into below-50 contraction territory. Prices paid ticked down nearly a point to just under 52—barely in expansion—and representing a significant normalization of inflationary forces, although energy prices represented the bulk of the change. Anecdotal commentary noted that several companies have begun to manage employment levels through hiring freezes as opposed to layoffs, at least at this point. The ISM report is significant from a signaling standpoint, notably when it falls under the neutral level of 50.

(0) The ISM services/non-manufacturing index edged down by -0.2 of a point in September to a level of 56.7, but stayed above the expected 56.0 reading. By component, business activity and new orders declined by over a point each, but remained solidly expansionary at levels around 60. Employment rose by nearly 3 points to a further expansionary 53. New export orders also rose, further into expansion. Prices paid fell back by -3 points to the 67 level, which remains elevated but a strong improvement from levels during the pandemic and continuing to point to gradual easing of inflationary pressures. This index continues to show strength in the services side of the economy, which has continued to repair itself from the pandemic, in contrast to goods production activity that has started to slow.

(-) Construction spending fell by -0.7% in August, a more than expected, although the prior months’ revisions were mixed on net. Every category fell back for the month, led by public residential spending, down nearly -3%. With construction cost inflation up about a percent for August, spending in real terms fell even further.

(-) The JOLTs government job openings report for August showed a decline of 1.117 mil. to 10.053 mil., below the median forecast of 11.088 mil. This was led primarily by declines in health care (-236k), ‘other’ services (-183k), retail (-143k), and finance/insurance (-127k). The job openings rate fell by -0.6% to 6.2%, while the hiring rate was unchanged at 4.1%. On the other side, the layoff rate rose a tenth to 1.0% and the quits was unchanged at 2.7%. Job openings are the easiest item for a company to pull back on at signs of economic weakness, or even just in response to a self-fulfilling prophecy caused by pullbacks from other firms in an industry. As labor markets remain very tight, there is room for openings to fall further before actual layoffs kick in. Nevertheless, the jobs-to-workers gap has tightened a bit from far wider levels a few months ago, but this measure, among others, remains tilted in favor of workers and job-seekers rather than companies.

(+) The ADP private employment report showed a gain of 208k in September, exceeding the 200k median forecast. Services jobs rose by 237k, led by 147k in trade/transportation/utilities. On the other hand, goods-producing jobs fell by -29k, with both manufacturing and construction in the negative. While not always correlated to the official government report, this data continues to show labor market strength.

(-) Initial jobless claims for the Oct. 1 ending week rose by 29k to 219k, beyond the 204k expected by median forecast. Continuing claims for the Sep. 24 week rose by 15k to 1.361 mil., above the forecasted 1.350 mil. New claims were led by a 8k rise in Puerto Rico, due to hurricane effects, likely to be further reflected in FL and perhaps SC also in the next few weeks. CA and MO also saw sizable gains. Natural disasters have tended to bump claims temporarily higher, disrupting the ability to see broader trends, but overall levels for claims remain relatively low.

(0/+) The employment situation report for September was stronger than expected, reiterating the resilience of the U.S. labor market, and higher likelihood of the Fed continuing to hike rates at a rapid pace. Nonfarm payrolls rose by 263k, compared to the 255k median consensus, but running well below the pace of the past several months. By segment, leaders included leisure/hospitality (83k), health care (60k), and professional/business services (46k). Also gaining were manufacturing (22k) and construction (19k). The government segment was particularly poor, falling by -25k. Average growth in 2022 in total is about -140k/month lower than that in 2021, so is slowly decelerating.

The unemployment rate ticked down by -0.2% to 3.5%, despite expectations for no change, and again falling back down to multi-decade lows. The affiliated household survey showed a gain of 204k, while the U-6 underemployment rate also fell substantially, by -0.3% to 6.7%. These all largely reflected a lower labor force participation rate. Average earnings rose 0.3%, as in August, which corresponded to a deceleration of -0.2% to a below-inflation 5.0% gain on a year-over-year basis. The average workweek length has been unchanged for several months in a row at 34.5 hours.

U.S. stocks started Monday experienced their best day in months (up 3%) as weaker ISM manufacturing data helped raise recession odds, as well as the chances of the Fed pulling back on hawkish rate hikes. This was a nod back to the ‘bad news is good news’ theme the market occasionally reverts to, especially when Fed policy is involved. However, by Friday, a decent Sept. monthly jobs report was good news for the already-strong labor market, but bad news for those hoping the Fed might be holding back on future rate hikes, pulling equity sentiment down.

By sector, energy led the way, rising 14% on the heels of a spike in crude oil prices. Other strong sectors included industrials and materials, with gains over 2% for the week. Defensive sectors lagged, with a -3% drop in utilities, in keeping with higher interest rates. Real estate also fell back by over -4%, due to the same interest rate impact. Earnings season for Q3 is poised to begin this coming week, with estimates from FactSet still showing growth, yet to a lesser degree than a few months ago.

Foreign stocks gained last week, generally in line with domestic stocks, with emerging markets outperforming developed markets slightly. The emerging market response was due to a 10%+ in Brazil, based on first round election results ending tighter than many anticipated—this is expected to cause both sides to embrace less extreme and more orthodox ‘middle’ policies favored by markets. Chinese stocks were quiet, as market closed for a holiday week, although new lockdowns in several cities again raised pandemic concerns.

U.S. bonds fell back as interest rates again crept higher, due to economic data during the week not likely poor enough to derail central bank rate hikes. Floating rate bank loans and high yield fared best, with gains of several percent, helped by stronger equities and rising yields, while treasuries fell back. Developed market foreign bonds also declined, not helped by a stronger dollar, while risk-taking was a catalyst for gains in emerging market bonds.

Commodities gained ground last week, led by a significant recovery in energy, and metals rising by several percent. The price of crude oil rose over 16% to just under $93/barrel. The key catalyst was the OPEC+ meeting held last week, resulting in a cut of 2 mil. barrels/day, which exceeded market expectations of 500k-1 mil. barrels. However, the net cut may be less considering lower production levels currently in several nations. The OPEC+ action highlights continued unpredictability, fueled by poor U.S.-Saudi relations following the death of journalist Khashoggi, and leading to U.S. requests for price relief falling on deaf ears. Russia fares well with production cuts, with higher prices scaling up additional revenue. As a result, the U.S. may conduct an end around via loosening sanctions against Venezuela or other measures to raise global petroleum production.