I have been reading “War Without Rules” by Brigadier General (Retired) Robert Spalding, United States Air Force. It is very interesting insight into the ongoing war with China. You can see a description at Amazon by clicking on the picture. 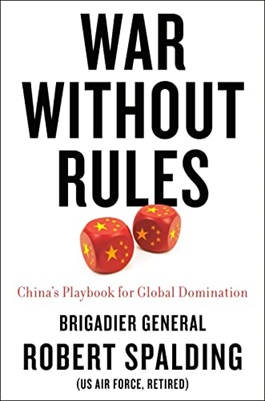 Economic releases for the week included a decline in ISM manufacturing data, as well as in job openings. However, the ISM services index rose, contrary to expectations. The employment situation report for July came in far better than expected.

(0) The ISM manufacturing index for July ticked down by -0.2 of a point to 52.8, the lowest level in two years, but was stronger than expectations calling for only 52.0. Under the hood, conditions were mixed, as production fell by over a point, but remained in expansion; new orders fell further into contraction; while employment ticked up to nearly 50 (in neither expansion nor contraction). Supplier deliveries fell by -2 points to 55, while inventories ticked up. Prices paid fell by nearly -20 points for July, one of the largest single-month declines since 1948, in keeping with a pullback in monthly prices for energy and metals. This was seen as a mixed report, with the drop in inflation inputs being a significant positive, but economic activity falling obviously a challenge.

(+) The ISM services/non-manufacturing index for July rose by 1.4 points to a further-into-expansion 56.7, in contrast to an expected drop to 53.5. The details within the report were also strong, led by increases in business activity, new orders, and employment. Prices paid and supplier deliveries measures each fell by 5-10 points. While seen as weakness in some cycles, this time, these signaled a welcome easing in inflationary impulses, taken as a positive sign by investors seeking any sign of peaking prices. Overall, this reflects a continuing post-pandemic consumer spending transition away from goods into services, with a still-positive impact on the economy.

(-) Construction spending in June declined by -1.1%, which disappointed compared to the median forecast calling for a 0.1% increase. Public residential spending rose by 0.5%, the only segment with a positive result. All other areas fell back, led by private residential spending, down nearly -2%. Overall, with construction costs up 1.4% for the month, real spending fell even further into the negative.

(-) The government JOLTs job openings report for June showed a decline of -605k to 10.698 mil., below the median forecast calling for 11.000 mil. In fact, this was the third largest 1 mo. drop in the 20+ year life of the series. Interestingly, the decline stemmed largely from a removal of job listings rather than the direct hiring impact of filled jobs, which goes along with growing expectations for a slowing economy. By sector, retail accounted for more than half of the decline (-343k), along with leisure (-91k), and construction (-71k). Manufacturing openings were down a less severe -26k. The job openings rate fell by -0.3% to 6.9%, while the hiring rate fell a tenth to 4.2%. On the other side, the layoff rate was unchanged at 0.9%, as was the quits rate at 2.8%, with the latter remaining at a historically-high level. Regardless of the negative month, demand for labor and worker choice remain at high levels compared to history.

(0) Initial jobless claims for the Jul. 30 ending week rose by 6k to 260k, matching consensus expectations. Continuing claims for the Jul. 23 week rose by 48k to 1.416 mil., above the 1.385 mil. forecast. Claims continued to be mixed by state, but showing more volatile results—larger gains in CT but declines in MA. Overall, the trend in claims remains higher from historical-low levels.

The unemployment rate fell a tenth to 3.5%, which was the lowest level in over 50 years. The U-6 underemployment rate was unchanged at 6.7%, remaining at a close to 30-year low. A drop in the labor force participation rate of a tenth contributed, specifically due to fewer workers in the 16-24 age group. Average hourly earnings rose 0.5% for the month, beating expectations calling for 0.3%. This resulted in an unchanged 5.2% increase on a year-over-year basis. The average workweek length was unchanged at 34.0 hours.

(-) The July Federal Reserve Senior Loan Officer Opinion Survey for Q2, showed that standards tightened a bit, in contrast to prior quarters. For commercial/industrial loans, demand rose in both larger and smaller companies, while standards tightened. This was due to a worsening of industry-specific conditions noted by two-thirds of banks, with the reason of a less certain economic outlook running a close second. However, weaker bank capital or liquidity positions were noted by only a quarter of banks as a cause, which attests to the stronger fundamental position of banks relative to, say, the pre-2008 period.

In commercial real estate lending, bank standards tightened significantly in the quarter, especially for more speculative construction/development loans, but also those secured by multi-family properties. Demand for construction/development loans fell, while demand for multi-family residential continued to rise (along with strong apartment construction relative to single-family noted in other data). For residential mortgages, credit standards tightened in almost all segments, from jumbo to sub-prime, although less so on the GSE side. In consumer debt, higher demand for credit cards was tempered by weaker auto demand; standards for both were little changed. This was an interesting and possibly transitional quarter, as higher interest rates combined with an apparent increasing cautiousness from banks surrounding both borrower quality and economic conditions moving forward. Consumer debt has also been rising, as the effects of government stimulus payments fade away, and inflation has pushed living costs higher.

U.S. stocks fell back early in the week as members of the Fed attempted to ward off expectations of a reversal in policy as growth slows, through more hawkish talk. However, sentiment recovered due to stronger than expected earnings and economic data, yet leveled off as the ‘good news is bad news’ narrative took hold again by Friday, due to the strong jobs report being a likely catalyst to keep the Fed pushing rates higher.

By sector, technology and communications fared best, up 1-2% as growth stocks reemerged, while energy stocks fell -7% along with the severe drop in crude oil prices. Real estate fell back by over a percent with rising interest rates again.

Stock earnings continue to roll in, with 87% of companies in the S&P having reported, and Q2 showing a net 6.7% gain on a year-over-year basis, relative to expectations of 3.4% (per FactSet). However, there are caveats as usual, with exceptionally strong results from energy companies due to higher oil and gas prices, continued pandemic recovery in some sectors, as well as the negative influence of banks which are setting aside larger loan loss reserves. Those aside, earnings remain flat to even negative when adjusted for seasonality issues—this has likely been part of the reason for still-lackluster sentiment as investors wait for potentially another shoe to drop (if it does).

Foreign stocks ended in the negative for the week on net, with emerging faring slightly better than developed, which were led lower by Japan. The Bank of England raised rates by 0.50% to 1.75%, which was coupled with perhaps surprisingly negative commentary about upcoming risks (even predicting a year-long recession starting later this year). The U.K. is less dependent on Russian energy than is Europe, but faces other challenges, such as a labor shortage, which has been a side effect of Brexit immigration policies. However, due to inflation concerns, central banks in the U.K. and Europe are expected to continue their tightening pace. EM nations were little changed on net, with gains in Brazil and Turkey raising the overall index. House Speaker Pelosi’s visit to Taiwan raised some tensions again in the Chinese region.

U.S. bonds fell back as interest rates again rose across the curve. Floating rate bank loans gained, however, as one of the few positive stories for the week. Foreign bonds were mixed, with developed market debt negatively impacted by a stronger dollar, and emerging market bonds higher.

Commodities fell back overall, led by energy, although agriculture and industrial metals also fell back. The price of crude oil fell on the week by nearly -10% to $89/barrel, along with signs that a slowing economy is starting to affect demand, and rising supplies.

“Mortgage rates remained volatile due to the tug of war between inflationary pressures and a clear slowdown in economic growth,” said Sam Khater, Freddie Mac’s Chief Economist. “The high uncertainty surrounding inflation and other factors will likely cause rates to remain variable, especially as the Federal Reserve attempts to navigate the current economic environment.”

The 5-year Treasury-indexed hybrid adjustable-rate mortgage (ARM) averaged 4.25% with an average 0.3 point, down from last week when it averaged 4.29%. A year ago at this time, the 5-year ARM averaged 2.40%.