\If you or someone you know is worried about retirement, send us an email or give us a call for a no-obligation Retirement and Social Security Analysis.

(-) The Philadelphia Fed manufacturing index fell by -9.0 points to a further contractionary level of -12.3 for July, well below the positive 0.8 median forecast expected. While shipments increased, further into expansionary territory, new orders fell further into contraction (surprisingly, to the lowest level since 2009), and employment fell back, but remained in expansion. Prices paid and received both fell back sharply as well, but remained high, while delivery times improved. Reiterating the poor sentiment in the business community, expected business conditions six months out fell nearly -12 points to -19, which is the lowest reported level since 1979. Anecdotal commentary reported expectations for raising worker wages more than originally planned this year, in line with higher overall input costs generally.

(-) Existing home sales fell back -5.4% in June, for the fifth straight month, to a seasonally-adjusted annualized rate of 5.12 mil., which was beyond the -1.1% median forecast estimate. Single-family home sales fell by nearly -5%, while condos/co-ops fell by -10%. Regionally, flat results in the Northeast ended up the strongest result, while they fell most sharply in the West by -11%. The median sales price ticked up by 1.9% to $416,000, which represented a gain of over 13% year-over-year. The months’ supply of homes increased by 0.4 to 3.0—the highest level in a few years. The supply/demand balance has appeared to improve, but affordability remains a significant challenge with mortgage interest rates still nearly two times where they were a few months ago.

(-) Housing starts for June fell by -2.0% to a seasonally-adjusted annualized rate of 1.559 mil. units, below expectations calling for a 2.0% increase. Under the hood, single family led the downturn by dropping -8% (to the lowest level in two years), while multi-family starts rose 10% for the month, continuing a run of strength. Regionally, results were mixed, with declines in the Midwest and South, but increases in the Northeast and West. Building permits declined by -0.6%, which outperformed the median forecast decline of -2.7%. In a similar pattern to starts, single-family fell -8%, while multi-family rose 12%. Over the past year, the picture has also been mixed, with single-family starts down -16% while multi-family are up 16% (permits up 26%). The multi-family group is much more cyclical, and has been on a tear during the pandemic recovery, so could be more vulnerable to cracks in demand as well as higher interest rates, which can be challenging for construction firms and developers.

(-) The NAHB housing market index fell by -12 points to a level of 55 in July, far below consensus estimates calling for a mere -2 pt. drop to 65. This was the largest single-month decline other than Apr. 2020 in the early pandemic. All segments, current sales, future sales, and prospective buyer traffic, all fell back sharply by roughly the same amount. Every region also fell, led by the West and South in the double-digits. Although the survey is fairly simple, with only stats and no qualitative content, the NAHB reiterated the assumption that higher financing rates have put a sharp damper on activity.

(-) The Conference Board’s Index of Leading Economic Indicators for June fell by -0.8%, continuing a string of four straight declines. The result was led by consumer pessimism about upcoming business conditions, rising jobless claims, weaker stock prices, and lower manufacturing new orders. On the other hand, the coincident economic indicator index rose 0.2%, and lagging index rose 0.8%. The divergence can be interpreted as conditions not looking highly suggestive of a recession this quarter, but future conditions seem to be bringing one closer. However, per the second chart showing year-over-year changes below, conditions are far from dire, and we’ve experienced decelerations and mid-cycle slowdowns before without entering recession. Hence, the continued market confusion. 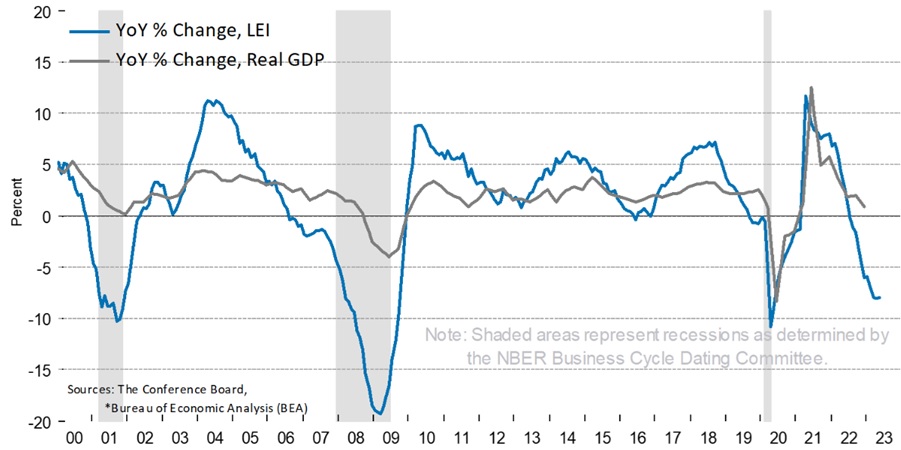 (-) Initial jobless claims for the Jul. 16 ending week ticked up by another 7k to 251k, above the 240k consensus estimate. Continuing claims for the Jul. 9 week rose by a more dramatic 51k to 1.384 mil., above the 1.340 mil. median forecast. Despite the headline, a 20k rise in claims in MA accounted for the majority, while several other large states reported declines of a few thousand each. As we’ve seen in recent weeks, claims are beginning to tick higher (to levels last seen in Nov. 2021), but from an extreme low base where further improvement was less likely. However, the overall environment remains benign, so the pace of deterioration will be more closely watched in coming months, due to the historical correlation between rising jobless claims and economic downturns.

U.S. stocks fared positively again, with lackluster economic data pointing to the idea the Fed may not need to raise rates as aggressively as feared (such as an upcoming week increase of potentially 0.75% rather than 1.00%), as well as continued negative sentiment being indicated by low equity ownership and high cash levels, pointing to a potential turnaround. After a positive start Monday, stocks turned mildly negative upon a report that Apple is slowing hiring. In fact, this is how recessions can become self-fulfilling, with companies not wanting to be left holding the bag, so begin the pare back first. The Senate vote in favor of the Chips for America Act, which provides $52 bil. in domestic subsidies for computer chip foundry production and tax credits, boosted tech stocks (notably semiconductors) early in the week.

By sector, consumer discretionary stocks led, with gains of nearly 7%, followed by industrials and materials. Laggards included the normal defensive sectors health care and utilities, which earned minor declines. Real estate gained around 3%, with the help from lower interest rates.

The continued question is: what about earnings? So far, responses have been largely individualized by company, with some better than expected and some worse. With equity price multiples having already declined, earnings expectations would be the natural next phase to potentially conclude the bear market, but such downward revisions have not yet occurred. This isn’t to say they won’t occur later in the Q2 reporting, or in Q3 or Q4. We just haven’t seen the extreme negativity in earnings so far, although sentiment from surveys, such as fund managers, remains very bearish—in fact, as much so or more than in 2008. Of course, this would be seen as a bullish sign for risk-taking, when doing so seems like an unpopular idea. Another sign of contrarian optimism is the fact that institutional short positions have moved to very high levels—reminiscent of prior pullbacks, seen twice a decade or so—and often followed by recoveries.

Foreign stocks slightly better than those in the U.S., with help from a weaker dollar. Europe and Japan outperformed the U.K. and emerging markets, with European sentiment helped by Russian natural gas shipments resuming. In EM, several larger index members performed well, but were held back by flattish returns in Brazil and China. Chinese policymakers attempted to reduce stimulus expectations, in order to avoid financial excesses, while GDP expectations were also in doubt. Concern remains over the handling and continued high debt levels in the Chinese real estate development sector.

The ECB raised interest rates by 0.50%, more than the expected 0.25%, which remained controversial due to the even more fragile forces in Europe between inflation and slowing economic growth (tenuous due to high energy price concerns). The other component challenging the ECB is the recent widening of spreads in Italy, which has happened frequently in the past when investors feel less comfortable with risk-taking, due to their higher debt load. However, for ECB policy to work smoothly, too-wide spreads between member countries’ bonds can be problematic, hence the ‘anti-fragmentation’ measures to help tighten these differences.

U.S. bonds fared positively, as longer-term treasury yields reached their lowest levels in two months. High yield fared better than the rest of the pack, in keeping with stronger equity results. Foreign bonds were helped by an over -1% drop in the value of USD, particularly in emerging markets.

Commodities were mixed on the week, as gains in industrial metals and energy offset a decline in agricultural prices. The price of crude oil fell by -3% to just under $95/barrel, with demand still threatened by recession fears and higher supplies. Natural gas prices rose over 15% Gas appeared to be flowing again through the European Nord Stream pipeline, which led to improved market sentiment—as worst case scenarios could be averted—but heat waves in the U.S. and Europe drove demand sharply higher. Grain prices fell back after a Ukraine-Russia export deal was signed to allow shipments to nations in dire need, in efforts to reduce the potential for a global food crisis.

“The housing market remains sluggish as mortgage rates inch up for a second consecutive week,” said Sam Khater, Freddie Mac’s Chief Economist. “Consumer concerns about rising rates, inflation and a potential recession are manifesting in softening demand. As a result of these factors, we expect house price appreciation to moderate noticeably.”

The 5-year Treasury-indexed hybrid adjustable-rate mortgage (ARM) averaged 4.31% with an average 0.3 point, down from last week when it averaged 4.35%. A year ago at this time, the 5-year ARM averaged 2.49%.