Famous investor Ray Dalio has written a new book: Principles for Dealing with The Changing World Oder. It’s a fascinating look at how economic cycles interact with the forces of empires. If you click on the graphic, it will take you to a very interesting 43-minute long video on YouTube that explains his insights. https://www.youtube.com/watch?v=xguam0TKMw8 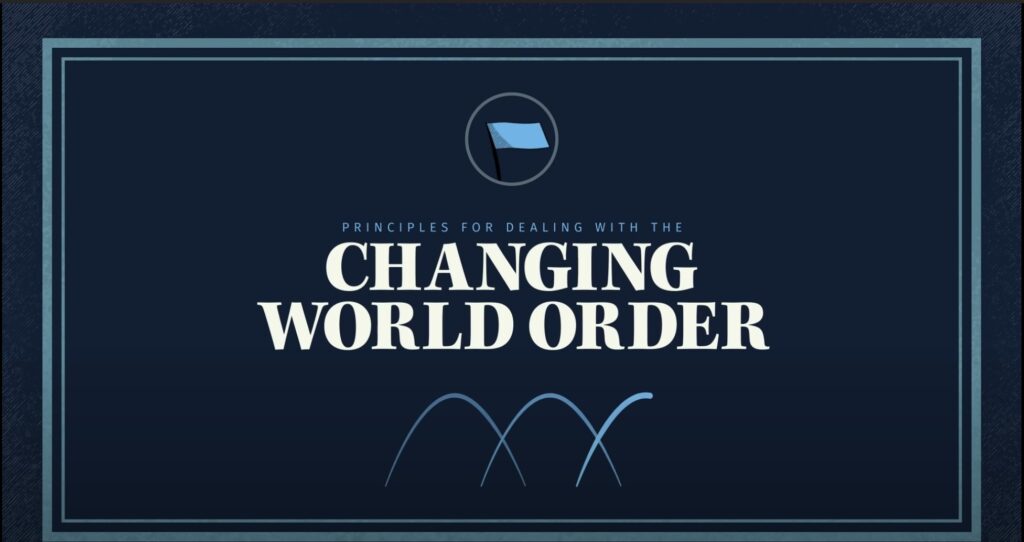 Global markets fell back sharply last week, as volatility amidst a variety of geopolitical and financial crosswinds as well as a rising interest rate regime kept sentiment depressed. Bonds reversed course and saw gains as longer-term yields fell back from recent peaks. Commodities were mixed, with little change in oil prices, which remained high.

(0) Import prices were unchanged for April, which represented a positive surprise compared to the 0.6% increase expected, and a sharp reversal from a 2.9% gain in March. Removing petroleum imports, the core index rose 0.4%, which was still about half the rise expected. Within specific components, food prices gained just under a percent, and capital goods and autos rose 0.3-0.4%; on the other hand, industrial supply prices fell -0.5%. Year-over-year import prices remain up 12%.

(-) The producer price index for April rose 0.5%, which was largely on par with expectations, but slower than last month’s 1.6% rise, after considering an upward revision. The headline gain was generally due to energy and food each up over 1.5% in the month. Removing food and energy, core PPI rose just a slightly lower 0.4%, which was about half the amount expected, which could be considered a positive result. This brought the year-over-year PPI increase to 11.0%, below the March pace of 11.2%, so the idea of ‘peaking’ inflation is starting to take hold.

(-) The consumer price index in April rose by 0.3% on a headline level, and 0.6% for core, removing food and energy—a tenth or two more than expected. Energy prices actually fell back by over -5% in April, although food prices rose nearly another 1%. Other components included a 1% rise in new car prices, although used car prices have continued to fall back. Importantly, shelter prices continued their streak of 0.5% monthly increases (at a 6%+ annualized rate). A rise in airfares also added 0.1% to the underlying CPI result (not a huge component, but up 19% for the month individually, due to a combination of rising demand and weaker supply of available flights). Services generally have seen rising inflation creep, in contrast to only goods in the first stage of higher inflation, although items such as furniture, auto parts, and cars themselves continue to see strong upward pressures.

On a year-over-year basis, CPI remained 8.3% and 6.2% higher on a headline and core level, respectively. This represented a few ticks below March’s peak, and provided some hope that inflation could finally be starting to wane. Volatility in energy prices have remained a powerful force in driving underlying inflation rates—both directly and indirectly, through other transported items. Food prices are also significant, and remain up over 9% year-over-year, not only for groceries but also restaurant meals and the associated wages needed to staff operations. Despite the still-high inflation readings and focus on these by politicians, economists, and markets, there remains a good deal of uncertainty about inflation rates for the latter part of 2022. The war in Ukraine has added another layer to goods shortages/supply disruptions, enhanced by Russian embargoes on energy and other products, while Covid cases in China have led to lockdowns and another wave of manufacturing and transportation delays.

While it affects Europe more than the U.S., political pressure to cut off Russian energy supplies completely has exacerbated their economic pressures, due to their high reliance and lack of other supply sources to fill the gap at this point. That said, there seems to be a growing view that the worst may be behind us. A gradual drift downward, even it takes another 6-12 months to subside back to ‘manageable’ levels, could alleviate at least one financial market black cloud. Goods prices may even experience some ‘payback’ of further price deceleration beyond normal if supply conditions improve. This could be offset, however, by increasing rents and higher home prices, as shelter makes up nearly 40% of the CPI basket. Importantly, longer-term (5y and 10y) inflation expectations remain relatively contained, and have been falling by up to a half-percent since the Fed’s March meeting and fairly aggressive hawkish tone. In fact, as published by the Atlanta Fed, business inflation expectations for the coming year have remained around a consistent 3.7%.

(-) The preliminary Univ. of Michigan index of consumer sentiment for May fell by -6.1 points to 59.1, short of the 64.0 level expected. Assessments of present conditions and expectations for the future both decreased by about the same level, with fairly consistent pessimism spanning age and income levels. Noteworthy, was the report that buying conditions for durable goods fell to the lowest level in history (since 1978). However, future inflation expectations were unchanged for both the coming year, at 5.4%, and the next 5-10 years, at 3.0%.

(0/+) Initial jobless claims for the May 7 ending week ticked higher by 1k to 203k, exceeding expectations calling for a lower 193k. Continuing claims for the Apr. 30 week fell by -44k to 1.343 mil., below the 1.372 mil. consensus estimate. Initial claims were mixed by state, but featured few extreme readings. Continuing claims remained at a historical low of 1.0% of ‘covered employment, which indicates exceptionally-strong labor markets.

(+) The Federal Reserve Senior Loan Officer Opinion Survey for May, covering Q1 2022 noted that standards eased a bit across the board for loan-making activities. This is in contrast to normal Fed tightening cycles, but reflects underlying fundamentally decent conditions in the economy.

For commercial & industrial loans, demand strengthened, although to a smaller degree than in Q4 2021. Lending standards eased, albeit to a smaller degree than the prior quarter, and mostly for medium-sized and larger firms, not small. It appeared that any easing was done due to more aggressive competition from other banks or lenders, with a smaller number noting industry-specific improvement and/or a lesser degree of uncertainty surrounding economic conditions.

In commercial real estate, demand for multi-family loans strengthened, while those for construction/land development weakened. Standards for these loans tightened a bit in the quarter on net, with easing for multi-family properties offset by tighter standards for construction/development loans. For residential mortgage loans, credit standards eased for all sizes and quality levels. Additionally, both demand and willingness by banks to make consumer installment loans increased, and application standards for credit cards and auto loans eased.

U.S. stocks were down again, representing the sixth straight down week for the S&P 500. However, Friday’s advance trimmed the negativity from earlier in the week, which seemed to be helped by the Elon Musk purchase of Twitter (and use of Tesla share proceeds) to be on hold. By sector, only defensive consumer staples ended in the positive, followed by minor declines for communications, health care, and utilities, while all other groups were sharply negative. Real estate securities also fell back nearly -4%.

Language from the Fed of the prior week started to cause hopes for a ‘soft landing’ to diminish—that would be the ideal place of controlled inflation but rates not tightened enough to cause a recession. Over the last 13 rising rate instances since 1955, 10 have resulted in recessions, with 3 soft landings (per Schwab data). So, while possible, many economists and investors are hesitant in placing too much hope. Continued lockdowns in China, exacerbating supply and transportation hurdles, kept sentiment depressed as well.

The Federal Reserve’s Financial Stability Report, published semiannually, was released, and offering a mixed to pessimistic view of the economy. Notably, current high inflation, rising interest rates, and lower liquidity have raised risks, notably if economic growth slows. Of course, this is stating the obvious, but does explain the higher amount of asset volatility in recent weeks—as markets digest the probabilities of various outcomes. As of Friday, the S&P 500 remained down over -15% from its 1/3/22 peak, with the Russell 1000 Value Index outperforming by only being down -8% relative to the tech-heavy Russell 1000 Growth down -24%. At these levels, the most common investor question appears to be, ‘Is the bear market over?’ Or, if a recession begins to appear more inevitable, ‘How much lower could we go in the interim?’

Foreign stocks in Europe gained in local currency terms during the week, but were reduced to negative results when accounting for a stronger U.S. dollar. Other regions, including emerging markets especially, were negative in line with U.S. equities and headwinds facing global assets generally—high inflation, tighter U.S. central bank policy and what that means for foreign central banks in the future, Ukraine, and Chinese lockdown impacts. Specifically, Brazilian and Chinese stocks gained, while India and Turkey fell back by the sharpest degree, demonstrating the mixed nature of the week. Covid cases in China appear to be declining, based on reports, but reopenings from severe lockdowns have been slow to unfold. In the meantime, the government has cut interest rates and implemented further stimulus measures to bridge the gap, again.

U.S. bonds reversed course by gaining last week as interest rates fell back across most of the yield curve. High yield and senior loans fell back last week, along with the rally in traditional bonds. Foreign bonds were mixed, despite a strong advance in the value of the U.S. dollar, which usually acts as a significant headwind. In fact, the dollar reached a six-year high against the euro last week.

Commodities were mixed to lower last week, with gain in agriculture offset by declines in energy and metals. The price of crude oil gained under a percent on net to just over $110/barrel, with far less drama than we’ve become used to. Natural gas fell back by nearly -5%. Metals prices remain challenged by lockdowns in China, which has held back manufacturing activity with global impacts. Gold has also fallen as of late, which may surprise some which see it as a ‘safe haven’ during times of market turmoil; however, rising real rates and an exceptionally strong dollar have been more important headwinds. Over the last few days, India’s just-announced ban of wheat exports, in an attempt to tame local food costs, has caused another round of global price gains.

“Homebuyers continue to show resilience even though rising mortgage rates are causing monthly payments to increase by about one-third as compared to a year ago,” said Sam Khater, Freddie Mac’s Chief Economist. “Several factors are contributing to this dynamic, including the large wave of first-time homebuyers looking to realize the dream of homeownership. In the months ahead, we expect monetary policy and inflation to discourage many consumers, weakening purchase demand and decelerating home price growth.”