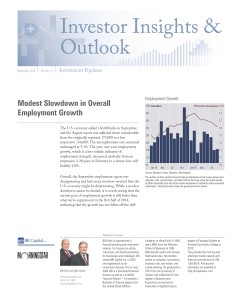 The U.S. economy added 142,000 jobs in September, and the August report was adjusted down considerably from the originally reported 173,000 to a less impressive 136,000. The unemployment rate remained unchanged at 5.1%. The year-over-year employment growth, which is a less volatile indicator of employment strength, decreased modestly from an impressive 2.3% pace in February to a slower-but-still healthy 2.0%.

Overall, the September employment report was disappointing and had many investors worried that the U.S. economy might be deteriorating. While a modest slowdown cannot be denied, it is worth noting that the current pace of employment growth is still faster than what we’ve experienced in the first half of 2014, indicating that the growth has not fallen off the cliff.

Morningstar economists continue to believe the underlying growth of the U.S. economy remains 2.0%–2.5%, driven by consumers and housing without a lot of help from any other sector. Better consumer incomes and low inflation combined with better employment prospects should keep these two key sectors moving upward, even in the face of a soft world economy. Of course, this all assumes that the recent terrorist attacks in Europe don’t unfold into something worse.

Employment: The U.S. economy added a much-better -than-expected 271,000 jobs last month. The previous month was revised slightly lower to 137,000, but overall there were improvements, and the gains were spread among many categories. The unemployment rate ticked down to 5%, and that’s despite the actual increase—a very small but nonetheless an increase—in the number of labor-force participants.

Overall, the latest JOLTS report seems to suggest that labor shortages are continuing to build and the balance of power continues to shift to the employee. Employment growth is more likely to be limited by a shortage of available employees and not employers’ desire to hire.

Retail Sales: On the surface, the overall retail sales report looked disappointing, as overall sales growth was just 0.1% between September and October. However, excluding gasoline and auto sales, growth was a more respectable 0.3%. Even that number was likely held back by warm weather depressing the sale of fall and winter apparel (the apparel category showed no growth in October) and maybe falling food prices. As the weather grows colder and some of the weekly retail sales data is beginning to show signs of life, the November report might look a little better.

The retail sales report has always been tricky to interpret because it isn’t adjusted for inflation, shifting weather patterns, and new retail channels. But readers need to be careful not to confuse poor results at conventional retailers and a mediocre retail sales report with a slowing consumer. Nothing could be further from the truth. Auto sales were above 18 million units in October on a seasonally adjusted, annualized basis—their best performance of the recovery. Restaurant sales were up 0.5% month to month and 5.5% year over year, hardly a sign of consumer retrenchment.

The Fed: Inflation has been so muted lately that the Consumer Price Index hasn’t been market-moving or even all that relevant. This time around the report takes on a little more significance because of the Federal Reserve’s focus on inflation and the upcoming December rate meeting. The Fed’s core inflation target rate is 2%. If the consensus for October core and headline inflation is correct at 0.2%, the year-over -year core growth rate will move up to 2% from recent readings that have been stuck at 1.8%. We caution

that the Fed prefers to use a separate measure of inflation that is not increasing as rapidly. Nevertheless, a core CPI inflation rate of 2% is likely to mean that Fed probably won’t use a low inflation rate as an excuse not to raise rates.

Global: A recent report from the OECD says that global growth is set to slow in 2015. In 2014, according to the OECD report, the world economy grew at 3.3%. They are now saying that 2015 will be substantially slower at 2.9%, which is also lower than their previous forecast of 3%. Then, for 2016, they are projecting the economy will grow at 3.3%, also slightly slower than they had previously forecast. The report is clearly seeing 2015 as kind of a pivot year and then better growth potential in 2016.

Four Tips for the RMD Season

Complaining about required minimum distribution from retirement accounts might seem a little like grousing that the pool is too crowded in Florida. It may be a nuisance, but it’s a high-class problem to have. That’s because for the majority of people, RMDs are a nonissue. For affluent retirees, however, RMDs can be unwelcome, shrinking the amount of assets that can enjoy tax-deferred compounding. With the deadline to take required minimum distributions fast approaching—Dec. 31—here are some tips to bear in mind.

1) Take the right amount at the right time. If you’ve just turned 70 1/2 this year then your deadline to take the first withdrawal is April 1st of the following year. Calculating RMDs, meanwhile, is a matter of dividing each of your RMD-subject account balances on Dec. 31 of the previous year by your life-expectancy factor. In most instances you’d use the IRS’ Uniform Lifetime table to calculate your RMD. But if your spouse is at least 10 years younger and also the sole beneficiary of your RMD-subject account, you’ll use the IRS’ Joint Life and Last Survivor Expectancy table (Table II in IRS Publication 590), finding the intersection between your age and your younger spouse’s age. That results in a smaller payout than would be the case if you based your RMD on your life expectancy alone. It’s also worth noting that you don’t need to take RMDs from each and every IRA account. As long as you take the right total from at least one of the accounts, you’ve met your distribution requirement.

2) Let your year-end checkup drive what you sell. Before you actually pull the trigger on your RMDs, conduct a thorough year-end portfolio review, taking stock of your asset allocation. Holdings that look unattractive or are simply consuming too large a share of your portfolio might be at the top of your list to sell to meet RMDs. That can serve the dual goal of potentially improving your portfolio and satisfying the IRS’ requirements.

3) Assess how they’ll affect your taxes. Even if you don’t intend to take your RMD until later in the year, it’s still valuable to calculate your RMD as soon as possible. That way, you can take steps to offset the tax impact—with tax-loss selling or accelerating deductions by prepaying property taxes, for example. A tax advisor should be able to help you gauge the impact of your RMDs on your tax bill and may be able to suggest steps you can take to reduce it.

4) Consider a qualified charitable distribution. For the charitably inclined, taking a qualified charitable distribution (QCD) can help kill three birds with one stone. By steering the IRA distribution directly to charity (rather than pulling the money out and then making a charitable contribution which is then deducted), the QCD enables the investor to fulfill the RMD, contribute to charity, and reduce adjusted gross income at the same time. From a tax standpoint, reducing AGI is preferable to taking a “below-the- line” charitable deduction, because a lower AGI may qualify the taxpayer for credits and deductions. Trouble is, Congress typically hasn’t approved the QCD maneuver until the end of the year. But there’s no downside in steering distributions directly to charity anyway. If Congress gives the go-ahead for QCDs, the retiree can use the distribution to reduce AGI. In the worst-case scenario, that the QCD provision remains dormant, the retiree could simply deduct the donation, as with a typical charitable contribution.

This article contributed by Christine Benz, Director of Personal Finance with Morningstar.

Funds in a traditional IRA grow tax-deferred and are taxed at ordinary income tax rates when withdrawn. Contributions to a Roth IRA are not tax-deductible, but funds grow tax free, and can be withdrawn tax free if assets are held for five years. A 10% federal tax penalty may apply for withdrawals prior to age 59 1/2. Please consult with a financial or tax professional for advice specific to your situation.

Existing home sales surged in September to the highest level of the recovery at 5.55 million units annualized. The year-over-year 3-month average growth stood at 8.3%, suggesting a continued strength in the existing home market as well. The demand for existing homes remains strong, and this is reflected in the low inventory levels that have been depleting for four consecutive months now. While existing home sales remain strong, the low inventory levels could potentially limit sales in the long run. Nonetheless, existing home sales are growing at a high single-digit rate based on the data released so far in 2015, which is good news considering that the existing home market actually contracted 3.1% in 2014. Overall, recent economic indicators suggest that the state of the housing industry remains strong, and that consumers continue to be confident about their long-term finances.