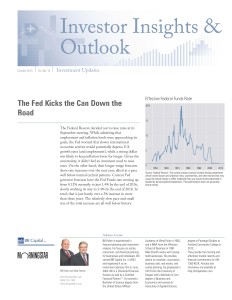 The Fed Kicks the Can Down the Road

The Federal Reserve decided not to raise rates at its September meeting. While admitting that employment and inflation levels were approaching its goals, the Fed worried that slower international economic activity would potentially depress U.S. growth rates (and employment), while a strong dollar was likely to keep inflation lower for longer. Given the uncertainty, it didn’t feel an imminent need to raise rates. On the other hand, their longer-range forecasts show rate increases over the next year, albeit at a pace well below normal cyclical patterns. Current Fed governor forecasts have the Fed Funds rate moving up from 0.12% currently to just 1.4% by the end of 2016, slowly working its way to 3.4% by the end of 2018. In total, that is just barely over a 3% increase in more than three years. The relatively slow pace and small size of the total increase are all well below history.

How Will Bond Funds React to Rising Rates?

It is difficult to predict how the markets will move once the Fed decides to raise rates. That said, this article explores some ideas about how different types of fixed-income mutual funds are likely to react to an increase in interest rates.

That being said, markets have responded very differently in past rounds of rate hikes. For example, during the rate hikes from March 2004 to June 2006, yields on the 30-year bond actually fell as the yield curve flattened; during the September 1993 to December 1994 hikes, yields rose across the yield curve. If the yield curve steepens (the long-end rises faster than the short-end) or shifts upward in a more or less parallel fashion, long-term bond funds could take a significant hit. But if the yield curve flattens, which is not out of the question given the troubles abroad that may continue to push investors toward the safe haven of U.S. Treasury bonds of all maturities, longer-term funds may fare better. For example, during the 2004–06 rate hikes, the 10-year Treasury bond lost 1.7% while the 30-year bond gained 2.2%.

Globally, it’s expected that the eurozone and Japan (the two main non-U.S. developed markets for bond investors) will be relying on quantitative easing much longer than the United States, thus delaying their own rate hikes. But the market for high-quality non-U.S. government bonds, including German bunds and Japanese government bonds, can track U.S. Treasuries when investors seek safe-haven assets. If the Fed continues to delay the rate hike, it could be seen as a signal that it’s concerned about economic growth and may stoke fears of slowing global growth, and German and Japanese government bonds could strengthen. Under the same scenario, the dollar is likely to weaken, which would boost issues denominated in euros or yen. What does this mean for an investor’s portfolio? Predicting the timing and magnitude of interest-rate movements is difficult, and many bond portfolio managers believe it’s folly to significantly change a fund’s position based on interest-rate predictions. Investors may be better off sticking with an allocation that suits their long-term investment goals, and understanding how different bond funds might perform during various rate environments can help.

The investment return and principal value of mutual funds will fluctuate and shares, when sold, may be worth more or less than their original cost. Mutual funds are sold by prospectus, which can be obtained from your financial professional or the company and which contains complete information, including investment objectives, risks, charges and expenses. Investors should read the prospectus and consider this information carefully before investing or sending money.

With international bonds, the investor is a creditor of a foreign government or corporation. International bonds are not guaranteed. International investments involve special risks such as fluctuations in currency, foreign taxation, economic and political risks, liquidity risks, and differences in accounting and financial standards.

Despite a softening world economy, Morningstar economists’ forecast remains relatively unchanged from their June 2015 forecast. They have upped the 2015 growth by a seemingly small 0.1% to 2.2%–2.6% range; however, it seems that the higher end of the range is now likely. The consumer has continued to do well, net exports haven’t yet proved to be the disaster everyone expected (mainly because imports have done as poorly as exports), and government spending is no longer falling. Housing continues to provide a meaningful contribution to overall GDP growth, too while business investment spending remains soft.

China: Most of the change we saw over the past quarter related to China. The Chinese currency was devalued, and many Chinese economic indicators continued to slow. Many of Morningstar analysts have been warning about China for some time. China has showed lower growth rates and missed growth forecasts for several years. It’s not new news. Still, the devaluation brought some already well-known weaknesses to the forefront. A slowing China generally has helped the U.S. economy as the small decrease in exports has been more than offset by lower commodity prices, which puts more money in consumer pockets.

The Fed: The other big news was that expectations of a Fed rate increase continue to get pushed out in time. At the end of 2014, some speculated that the Fed might take action as early as March 2015. Now in September, a rate increase by December is by no means a done deal. The Fed noted worsening conditions in China that could potentially slow the U.S. GDP growth rate and employment outlook as their reasons for further interest rate hike delay. Now the Fed has sowed doubts and created uncertainty for investors and business people as they openly fret about world growth rates. Uncertainty is the market’s worst enemy, and the markets have reacted accordingly. U.S. equity and emerging markets were little changed at the 2015 halfway point. Now, nearing the end of the third quarter, the S&P 500’s year-to-date performance looks to be down in the mid-single digits, and emerging markets a more worrisome mid-teens decline.

Auto Sales: Auto sales are a very large consumer purchase. The average vehicle price is more than $30,000, so it is not a decision that consumers take lightly. The commitment is large and long term, with some auto loans extending out to seven years. If consumers were worried about their employment or wage outlook, they wouldn’t be committing to big auto purchases. With the help of low interest rates, cheaper gasoline, and better employment data, auto sales in 2015 have done better than almost anyone expected. At the beginning of 2015, most sales focused on the 16.8 to 17.0 million range. It now looks like sales are much more likely to fall in the 17.0 to 17.5 million range for 2015, compared with 16.4 million units in 2014. The unweighted monthly average through August is 17.1 million units, so even the high end of the estimate range looks quite doable. Although there are some calendar effects that may be helping the number along a little, the ever-rising trend in recent months is hard to deny. It hardly suggests that consumers are feeling any fear.

Housing: Requiring even more confidence than buying a car is buying a home. With average new home prices of about $360,000, a home purchase is 10 times bigger than a car and totally dwarfs a $100 restaurant meal. To eliminate the investment aspect of multi-family homes (apartment owners renting out multiple homes or apartments), one should focus primarily on new home sales. Current sales levels at an annual rate above of 500 thousand units, remain near recovery highs. However, they are just off this spring’s levels, which benefited from improving weather conditions. So while new home sales have slowed modestly, the year-over-year growth rates (nearly 20% growth) remain impressive and hardly indicative of any kind of consumer temper tantrum.

A few ideas/tips/reminders investors might want to consider when reviewing their existing mutual fund line-up or choosing new funds:

Focus on your plan, not the news. Market-timing is very difficult to do well, so stick to your plan and keep investing.

Look for lower-risk funds. After a long-running bull market, this is probably more important than ever. Lower-risk funds may appear rather unappealing, but you may well hold on to these funds through the next downturn.

Find the right funds for you. If you have made a lot of fund trades over the years, maybe you need to dial down the volatility. Diversified or balanced funds may appear dull, but that may be a good thing. Dullness keeps emotions out of the equation, and it is emotional investing that wrecks a good plan.

Look for fund companies that close funds before they get too big. You can do this by finding funds that have closed in the past but have reopened. In addition, some funds will name a closing target well in advance so you can have some confidence that the fund won’t suffer asset bloat going in.

Low-cost funds should be a key part of your strategy.

The investment return and principal value of mutual funds will fluctuate and shares, when sold, may be worth more or less than their original cost. Mutual funds are sold by prospectus, which can be obtained from your financial professional or the company and which contains complete information, including investment objectives, risks, charges and expenses. Investors should read the prospectus and consider this information carefully before investing or sending money.