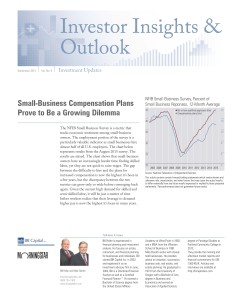 Small-Business Compensation Plans Prove to Be a Growing Dilemma

The NFIB Small Business Survey is a metric that tracks economic sentiment among small-business owners. The employment portion of the survey is a particularly valuable indicator as small businesses hire almost half of all U.S. employees. The chart below represents results from the August 2015 survey. The results are mixed. The chart shows that small-business owners have an increasingly harder time finding skilled labor, yet they are not quick to raise wages. The gap between the difficulty to hire and the plans for increased compensation is now the highest it’s been ina few years, but the discrepancy between the two metrics can grow only so wide before converging back again. Given the current high demand for skilled and semi-skilled labor, it will be just a matter of time before workers realize that their leverage to demand higher pay is now the highest it’s been in many years.

For the past several years, sober market watchers have been telling investors to brace for more modest returns from their portfolios. Just as trees don’t grow to the sky, nor do extended market rallies go on forever. If the market provides less of a helping hand in the future than it has in the past, that means that investors will need to do more of the heavy lifting to make their plans work. There are several steps investors can take to help improve their portfolios’ potential returns and, in turn, improve the viability of their plans. Strategy 1: Revisit Key AssumptionsThe S&P 500 has returned about 20% on an annualized basis since the market bottomed in March 2009. But stocks’ long-term returns have averaged less than half of that, and it’s reasonable to assume that returns over the next decade could be even lower than that due to lofty valuations. To help factor in a less-forgiving market environment, it’s a good time to revisit the key assumptions underpinning your retirement plan. For example, you might assume that bonds will return 2% and stocks will return only 6%. If these lower return projections point to a shortfall in your retirement plan, you can push back your retirement start date, or reduce your in -retirement withdrawals. Strategy 2: Assess Your Asset AllocationIt’s difficult to predict the future returns of stocks. On the other hand, starting yields on Treasury bonds have explained much of their performance over the subsequent decade. That means that with yields as low as they are, an investor who hunkers down in bonds and forsakes stocks could well be locking herself into a very low return. Investors who maintain higher equity positions won’t necessarily get rich, but they will at least have a fighting chance of outrunning inflation over time. That’s not to suggest that you throw standard asset-allocation guidance out the window: Individuals who expect to draw money from their portfolios in the near term will need cash and bonds. But it does suggest that the safety of cash and bonds could prove illusory over longer time frames. Strategy 3: Watch Investment Costs Like a HawkLower returns also mean that efforts to control a portfolio’s cost can be even more beneficial than in a higher-returning environment. After all, paying a 1% expense ratio on a balanced portfolio that earns 10% on an annualized basis–as the typical balanced portfolio has during the past five years–takes a 10% bite out of that return; if balanced funds return just 6%, as they have during the past decade, that 1% expense ratio translates into a 17% levy on the portfolio’s return. Given those numbers, investors’ stampede into various types of inexpensive passively managed products, looks quite rational. Strategy 4: Aim to Reduce the Drag of TaxesIn a similar vein, lower returns mean that taxes take a bigger bite of your portfolio’s value, on a percentage basis, than in a more flush return environment. Lower absolute returns can enhance the tax-saving features of vehicle like IRAs, company retirement plans, and 529 college-savings plans; once their tax benefits are factored in, even subpar versions of these accounts usually trump investing in a taxable account and paying taxes on dividends and capital gains on a year-in, year-out basis. That said, investors who are in a position to invest in their taxable accounts alongside tax-sheltered vehicles can take steps to reduce the drag of taxes on an ongoing basis: Favoring exchange-traded funds and index funds, individual stocks, and municipal bonds, as well as limiting trading, can go a long way toward reducing annual tax bills.

Disclosure: This is for informational purposes only and should not be considered tax or financial planning advice. This article contains certain forward-looking statements which involve known and unknown risks, uncertainties, and other factors that may cause the actual results to differ materially from any future results expressed or implied by those projected statements. Past performance does not guarantee future results.This article contributed by Christine Benz, Director of Personal Finance with Morningstar.

August was a wild month, with powerful downward movements in most world equity markets early on, followed by equally impressive gains afterward. Investors feared that China’s economic slowdown would drag down the rest of the world just as the Federal Reserve ended its emergency support. However, strong U.S. economic data combined with hope that the Fed will not increase rates in September set off an epic stock market rally.

GDP: The GDP report for the second quarter was revised up to a surprisingly strong 3.7% from just 2.3% in the previous report just one month ago. Although some GDP revision was expected, the quality and size of the upgrade were far better than anyone could have hoped for. Part of the strong increase in the second quarter was because of the abysmal first quarter, when the economy grew just 0.6%. Still, averaging the first and second quarters together, growth in the first half was over 2%, not bad for all the world drama.

Employment: On the surface, the August employment report was a modest disappointment to the market, with the U.S. economy adding 173,000 total nonfarm jobs versus earlier expectations of 215,000 jobs. However, readers should keep in mind that August is the lowest and most revised month in the employment data series. The total worker employment data was consistent with what everyone had been expecting and the average over the past six months.

There was other good news, too. The unemployment rate dropped surprisingly to 5.1% through a combination of job additions and a slightly smaller work force. The year-over-year, averaged data showed more of the same steady-state employment growth of just over 2% that has characterized most of this recovery. The steadiness has occurred despite large month-to-month swings that usually manage to cancel each other out.

Personal Income and Spending: Personal income and real disposable personal income grew 0.4% and 0.5%, respectively, exceeding more modest consumption growth of 0.3%. The battle between incomes and spending continues, with income growth exceeding spending growth for two months in a row after a period when consumption was winning out. Wage growth, due to a hiring binge late in 2014, is still running ahead of consumption, suggesting that there is more room for consumption to expand, especially now that oil prices are on their way back down. Historically, incomes and consumption have tended to move together, with consumption generally not as volatile as incomes. The close relationship and stable trend suggest a very consistent consumer who has not been spooked by world events.

Housing: This month’s forward-looking housing reports support the thesis of a sharply improving housing market. The new-home sales report, in particular, offered some bullish clues indicating that the housing momentum is real and should continue in the months ahead. On the home price front, the news was also good, suggesting that the streak of large monthly increases appears to be moderating as June’s data showed more modest monthly price growth. Housing has already provided a large boost to second- quarter GDP, and it looks like the third quarter is off to a good start, as well, providing hope that housing’s substantial contribution to the GDP calculation could be sustained.

Monetary Policy: The Fed meeting on interest rate policy this week remains the market’s focus. The raw economic data is not strong enough or weak enough
for a firm conclusion, leaving everyone running around dissecting individual words in speeches and examining the circumstances of past rate increases. The Fed seemed to show a great willingness to raise rates, and then the situation in China worsened. It’s tough to justify a rate increase in the face of financial turmoil. The impact of a small trial rate increase on the economy would probably be minimal, while the
market impact of a change is likely to be high.

A Changing of the Guard for Auto, Housing Recoveries

Although the improvements in auto sales have greatly outstripped the housing recovery, that trend should flip in the coming years. The chart below is a tale of two recoveries: the recovery in the auto industry and the recovery in the housing industry. Both of these segments comprise about 3% of the GDP and have knock-on employment effects throughout the entire economy. The chart shows that both of these industries suffered from 2005-08–coming to a real crescendo when things collapsed in 2008. Since then, both segments have improved nicely. However, the auto industry has done far better. The auto industry is now at its previous high, meanwhile, the housing industry still has a long way to recover. Lookingforward, Morningstar economists expect a changing of the guard where the housing industry continues to accelerate and the fully-recovered auto industry will continue to plateau.