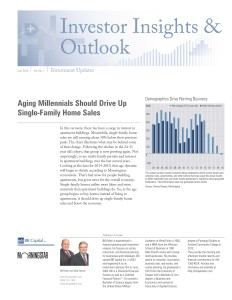 In this recovery, there has been a surge in interest in apartment buildings. Meanwhile, single-family home sales are still running about 50% below their previous peak. The chart illustrates what may be behind some of that change. Following the decline in the 24-31year old cohort, that group is now growing again. Not surprisingly, so are multi-family permits and interest in apartment buildings over the last several years. Looking at the data for 2014-2019, that age dynamic will begin to shrink according to Morningstar economists. That’s bad news for people building apartments, but great news for the overall economy. Single-family homes utilize more labor and more materials than apartment buildings do. So, as the age group begins to buy homes instead of living in apartments, it should drive up single-family home sales and boost the economy.

How Much Foreign Stock and Bond Exposure Do You Need?

This is one of the central questions confronting investors putting together their portfolios, yet there seems to be no consensus. Some experts argue for highly globalized portfolios, with allocations to foreign and U.S. stocks and bonds mirroring their market values. But other experts believe that due to the extra costs and volatility that can accompany foreign stocks and bonds—and especially the foreign-currency swings that can occur when those market gains or losses are translated into U.S. dollars—less is more when itcomes to foreign exposure. A related question is whether (and how) a portfolio’s allocations to foreign and U.S. stocks and bonds should change over time.

The issue of how much investors should stake in foreign stocks has been a contentious one for years. In the “less foreign is more” camp are experts who believe that because many U.S. blue chips are increasingly global in their reach, investors in them get exposure to foreign markets indirectly, while avoiding the extra costs and volatility associated with foreign stocks (foreign-currency swings in particular). At the other extreme are the “global market-cap agnostics”—those who suggest buying a basket of U.S. and foreign equities weighted according to their market values. The U.S./foreign allocations of global-market indexes have hovered around 50/50 for the past several years.

Meanwhile, most asset-allocation experts recommend a middle ground. Investors may not need to steer half of their portfolios to foreign stocks to obtain most of their diversification benefits. The rationale behind how much foreign exposure an investor may choose gets back to volatility. Because foreign stocks typically entail some currency risk as gains or losses are translated from foreign currencies to dollars, investors who want to reduce volatility may want to also reduce their foreign weightings accordingly.

Even though more than 50% of the world’s fixed- income investments exist outside the United States, investing in foreign bonds has the potential to add cost and volatility to a U.S. investor’s portfolio. Few asset- allocation experts are in favor of mirroring the global markets’ allocation to U.S. and foreign bonds.

Because types of foreign-debt exposure vary so widely, one-size-fits-all recommendations are tricky. Investors could steer a larger share of their fixed-income portfolio to foreign sovereign bonds rather than corporate and/or local-currency-denominated debt.

The volatility issue can be addressed, at least in part, by hedging out the currency risk of the foreign bonds. That helps ensure that investors partake of foreign bonds’ yields and any price changes, but not the currency-related impact when those returns are translated into dollars. However, hedging strategies entail costs, and in a low-returning asset class like bonds, those costs can take a big bite out of returns.

Past performance is no guarantee of future results. An investment cannot be made directly in an index. Diversification does not eliminate the risk of experiencing investment losses.

Returns and principal invested in stocks are not guaranteed, and stocks have been more volatile than the other asset classes. International bonds are not guaranteed. With international bonds the investor is a creditor of a foreign government or corporation. International investments involve special risks such as fluctuations in currency, foreign taxation, economic and political risks, liquidity risks, and differences in accounting and financial standards.

This article contributed by Christine Benz, Director of Personal Finance with Morningstar.

The biggest debate in the past few weeks was, what mattered more, the Chinese stock market decline or Greece’s potential exit from the eurozone? With a Chinese economy at $10.7 trillion and Greece at $0.2 trillion, it doesn’t seem like much of a fight. However, Greece does have some potential for wrecking the E.U. system, which is a very large, $13.4 trillion economy. Morningstar economists believe that Greece itself and the solutions to its problems are not likely to have a major impact on the world economy. China’s situation, however, remains much more worrisome.

Employment: The job openings report continued to show growth in May, setting yet another record for job openings at 5.36 million, up over 16% from a year ago and 0.5% (6% annualized) from April. Although records go back only as far as 2000, this is the highest reading in the entire data set.

Most economists have viewed this as a highly positive and leading indicator of future employment data. Morningstar economists, however, have pointed to the job openings data in several reports as an indicator that labor markets are tightening. Indeed, the indicator did a great job of forecasting the surge in hiring in late

2014 that almost no other data series did. Right now, the indicator seems to be saying that job growth may be plateauing as year-over-year averaged growth in openings is showing early signs of peaking. Year-over-year growth is still elevated at 19%, but that is down from a high of 24% several months ago.

Housing: Unfortunately, housing doesn’t seem to be as strong as previously hoped. Demand seems somewhat better, but on the supply side, housing starts still look pretty anemic and inventories of existing homes still aren’t really moving up, which is keeping continued pressure on prices.

Trade: The trade balance was the single largest factor in the U.S. economy’s weak first-quarter performance. Trade took almost 2 full percentage points off of the GDP calculation. Without the negative trade performance, the economy would have grown 1.7% instead of shrinking 0.2%. The trade deficit, which had swung as high as $50 billion in March, moved to $40.7 billion in April and stabilized in May at $41.9 billion.

Demographics: Demographics will also hold back the overall growth rates for some time to come. Low population growth (0.7% now, instead of 1.8% in the 1960s) is likely to keep the economy from growing any faster than Morningstar’s 2.0%–2.5% forecast, versus the average GDP growth rate over the last 50 years of around 3.1%. In addition, it isn’t helping that the fastest-growing age group in the U.S. economy is the miserly 65 and over crowd, while the absolute number of free-spending, high-income 50 year olds will be in a pattern of decline over the next five to 10 years.

Quarter-End Insights: Despite a disappointing first quarter, Morningstar economists expect higher growth rates in the second half of the year. Inflation is likely to run considerably higher in 2015 than either 2013 or 2014. Core inflation (excluding food and energy) will likely be around 1.7% for 2015, very similar to the last two years, but the ups and downs of energy prices will cause headline inflation to accelerate in 2015, especially if energy prices don’t fall soon.

The U.S economy added 280,000 nonfarm payroll jobs in May, surpassing the consensus estimate of 220,000. Certainly there was some help from the addition of summer jobs in some industries, but generally it was a very strong and clean report. The jobs data also exceeded the 12-month average of about 255,000 jobs per month.

The job growth average for January through April was a mere 200,000 or so jobs added per month, well below the annual averages and a sharp falloff from a very strong autumn. Viewed on a year-over-year, averaged basis, the jobs market has been consistently strong since September 2014. The private sector employment rate has been growing at about a 2.6% rate. Adding in the lethargic government sector, nonfarm payrolls are expanding at a very healthy 2.3% rate.

Month-to-month wage progression was also robust at a 0.3% monthly rate (3.6% annualized) and some previous data was revised, perhaps confirming the overall strength of the jobs market. Though less dramatic, the year-over-year hourly wage growth rates also appear to be improving. Growth in hourly wages and the number of workers added are relatively similar at 2.6% and 2.2%, respectively. While the market always focuses on the jobs number, wage growth is nearly as important. At this stage of the recovery, hours worked provides little help to wage growth and that is the case again now. Combining all three factors, employees, wage rate, and hours worked, total wage growth has been little changed at about 5%.

This article contains certain forward-looking statements which involve known and unknown risks, uncertainties, and other factors that may cause the actual results to differ materially from any future results expressed or implied by those projected statements. Past performance does not guarantee future results.