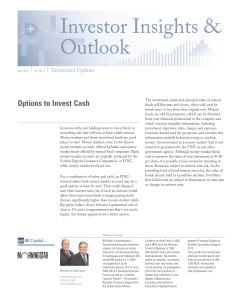 For a combination of safety and yield, an FDIC- insured online bank money-market account may be a good option, at least for now. That could change if and when interest rates rise, if such an increase would allow short-term bond funds to begin paying yields that are significantly higher than money-market yields. But given today’s choice between a guaranteed rate of close to 1% and a nonguaranteed rate that’s not much higher, the former appears to be a better option.

The investment return and principal value of mutual funds will fluctuate and shares, when sold, may be worth more or less than their original cost. Mutual funds are sold by prospectus, which can be obtained from your financial professional or the company and which contains complete information, including investment objectives, risks, charges and expenses. Investors should read the prospectus and consider this information carefully before investing or sending money. An investment in a money-market fund is not insured or guaranteed by the FDIC or any other government agency. Although money-market funds seek to preserve the value of your investment at $1.00 per share, it is possible to lose money by investing in them. Bonds are subject to interest-rate risk. As the prevailing level of bond interest rates rise, the value of bonds already held in a portfolio declines. Portfolios that hold bonds are subject to fluctuations in value due to changes in interest rates.

Employment: The U.S. economy added a disappointing 126,000 jobs in March. Certainly the over 300,000 jobs added late last year looked downright out of place. Job growth accelerated in a period when economic growth was slowing. Now with the much slower reported job growth in March and the substantial revisions to prior months, the employment data looks much more in line. However, the 126,000 jobs added in March is not the new normal, it was just an adjustment month.

The strong job openings data (from the end of February versus the jobs report, which is from the second week of March) confirms that the job market is not falling apart. In fact, the huge number of openings suggests that employers will need to pay more or be more willing to train workers before the pace of hiring will increase. Besides the job openings report, other metrics that point to a benign if not robust jobs market include initial unemployment claims, the labor sections of the small-business sentiment report, and various purchasing manager reports, as well as the ADP report.

Manufacturing: The ISM purchasing manager report continued to show a slowing—not panicky—manufacturing sector. The pace of deceleration has continued unabated since October and peaked way back in August. That weakness is now clearly visible in the month-to-month industrial production data that is now down three months in a row. The year-over-year data is at its early stages of deterioration, with more bad news likely with the softer March ISM report this week and a weak durable goods report last week.

The weakness in the ISM data was rather broad-based with just current production levels and prices paid subcomponents showing increases. Employment data was particularly weak, with that index dropping to 51.4, marking a second straight month of sharp declines. ADP payroll data suggested that March manufacturing employment was basically unchanged from February. Order backlogs also dropped sharply in March, although that may be because the port strike settlement in late February enabled manufacturers to clear backlogs. In some more clearly bad news, export orders remained well below the 50 level that separates growth from contraction, falling from 48.5 in February to 47.5 in March. It will probably take either a pop in auto manufacturing or a restart of the housing industry to get the manufacturing data humming again. That’s a real possibility by late summer, but probably not enough to help in the next month or two.

Housing: Recent pricing data suggests that home prices are on the rise again. According to CoreLogic, home prices increased 1.1% between January and February and were up 5.6% February over February. Year-over-year prices have been up for 36 consecutive months, or three years. The rate of home price growth has been slowing since fall 2013 when growth was as high as 11.9% compared with the current single- month reading of 5.6%. Still, it appears that the decline in the rate of home price appreciation has been stopped, with prices moving back up since a low reading of 4.7% in December. The three-month averaged, year-over-year data shows a similar pattern. We have also included CoreLogic-estimated results for March in the table below. We had estimated home price growth in 2015 at 4%–6%. Recent inventory data and price trends suggest that the high end of this range is now more likely.

Auto sales: On a more positive note, auto sales for March showed 17.1 million units sold (on a seasonally adjusted annual run-rate basis), the highest March number going back to 2000. Auto sales are one of the best indicators of consumer confidence, so this may be a sign that consumers are emerging from their malaise and could show some strength as we move into the spring.

Morningstar Investment Management published new research in December that examines the most common assumptions used to estimate retirement needs and lays out a framework for investors to take a more personalized approach to setting retirement savings goals.

“There are three common assumptions that many software tools and financial advisors use to come up with a retirement savings goal—a 70 or 80 percent replacement rate based on pre-retirement income, an income need that rises with inflation, and a 30-year retirement time horizon,” David Blanchett, head of retirement research for Morningstar Investment Management, said. “When we looked at actual retiree spending patterns and life expectancy, however, we found that these assumptions don’t hold true for many people and, on average, can significantly overestimate how much people will actually need to fund their retirement.”

Many expenses disappear after retirement, such as Medicare taxes, Social Security taxes, and retirement savings. The paper first demonstrates the effect on replacement rate calculations of accounting for taxable and non-taxable expenses that are no longer paid after retirement. Next, using government data, the analysis explores the actual spending patterns of retirees, and finds that they grow at a rate lower than inflation through most of retirement and then accelerate in later years because of higher health care costs. While the difference between the actual spending growth rate and the inflation rate is relatively small, it has a material effect over time. When the researchers modeled actual spending patterns over a couple’s life expectancy, rather than a fixed 30-year period, the data showed that many retirees may need approximately 20% less in savings than the common assumptions would indicate.

Results from this research show the actual replacement rate is likely to vary considerably by retiree household, from under 54% to over 87%. Retiree expenditures do not, on average, increase each year by inflation or by some otherwise static percentage; the actual “spending curve” of a retiree household varies by total consumption and funding level. Specifically, households with lower levels of consumption and higher funding ratios tend to increase spending through the retirement period and households with higher levels of consumption but relatively lower funding ratios tend to decrease spending through the retirement period. When consumption and funding levels are combined and correctly modeled, the true cost of retirement is highly personalized based on each household’s unique facts and circum¬stances, and is likely to be lower than amounts determined using more traditional models.

“While a replacement rate between 70 and 80 percent may be a reasonable starting place for many households, we find that the actual replacement rate can vary considerably,” Blanchett continued. “Take, for example, a high-income couple, living in a high income tax state like California, and saving a significant amount for retirement each year. If that couple retires in Florida or Texas, where there is no income tax, the replacement rate might be closer to 60 percent. By contrast, a low-income couple saving very little for retirement and retiring in California could have a replacement around 85 percent. It’s important for investors to consider their level of pre-retirement household income, expenses that discontinue after retirement, and post-retirement taxation.”

These findings have important implications for retirees, especially when estimating the amount that must be saved to fund retirement. A more advanced perspective on retiree spending needs can significantly change the estimate of the true cost of retirement.

Pitfall: One of the big mistakes of retirement distribution can be not allowing for some variability in your withdrawals, based on need. Many retirees use the 4% rule, which holds that you withdraw a specific dollar amount in year 1 of retirement, then adjust that dollar amount upward each year to account for inflation. Even though this rule can provide a good starting point, it’s unrealistic to expect that you’ll stick with a fixed withdrawal amount every year. You may have years when you need to spend more, such as for a new car, new roof, child’s wedding, or a special vacation, and years when you can get by with less.

Workaround: Be sure to pad anticipated expenses a bit to account for extras and unanticipated expenditures. Some retirees, for example, forecast when they would need to replace cars, take big trips, and repair roofs. Those padded expenses should be used when determining whether a withdrawal rate is sustainable. Alternatively, retirees could manage their distributions with the expectations that they will in fact not be static from year to year—for example, paying for unanticipated expenses on an as-needed basis with the expectation that they’ll have to tighten their belt in subsequent years.

This is for informational purposes only and should not be considered tax or financial planning advice. Please consult a tax and/or financial professional for advice specific to your individual circumstances. This article contributed by Christine Benz, Director of Personal Finance with Morningstar.