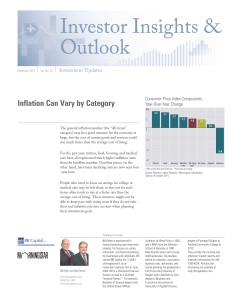 Inflation Can Vary by Category

The general inflation number (the “All items” category) may be a good measure for the economy at large, but the cost of certain goods and services could rise much faster than the average cost of living.

For the past year, tuition, food, housing, and medical care have all experienced much higher inflation rates than the headline number. Gasoline prices, on the other hand, have been declining and are now near four -year lows.

People who need to focus on savings for college or medical care may be left short, as the cost for such items often tends to rise at a faster rate than the average cost of living. Those investors might not be able to keep pace with rising costs if they do not take their real inflation rate into account when planning their investment goals.

As 2014 draws to a close, the U.S. is still experiencing a slow and longer-than-normal recovery.

GDP: The GDP growth rate in the third quarter was boosted to 3.9%, up from 3.5%, and well ahead of expectations of 3.3%. A lot of that improvement was due to high-quality items—more consumer and business spending. Unfortunately, that will make growth that much harder to achieve in the fourth quarter, which is now likely to be less than 3%. That would still leave the full-year GDP growth rate at about 2.3%, not much changed from 2012 and 2013. Consumption, business investment, net exports, and even government made decent-size contributions to overall GDP. As expected, residential housing was relatively disappointing, contributing just 0.1%. During this recovery, it has not been unusual for one category to drive most of the growth, while almost everything else showed limited growth or even a negative contribution.

Employment: The jobs report did far better than expected, with job growth of 321,000 for the month of November, the best result of calendar 2014 and the best report since 2012. However, it’s not clear whether this data reflects misplaced seasonal factors or newfound economic strength. November was also a great month a year ago, when 274,000 jobs were added. Indeed, November has generally been in the top half of the 12 months for job growth over the past four years. So maybe at least a portion of the high growth was due to overly aggressive seasonal factors.

Wages: Like the raw employment data, the hourly wage growth was unusually strong in November. Month-to-month wages grew 0.4%, which annualizes to almost 5%. However, monthly data tends to be volatile; looking at year-over-year data, averaged over three months, presents a truer picture of economic activity. The year-over-year, hourly wage growth trend has been consistent at around 2.0–2.1% for the past 12 months.

Consumption and Income: The government restated recent consumption and income numbers so some of the short- term good news has disappeared. In the original government data, incomes went up a whopping 1.4% between March and September while consumption grew a measly 0.6%. The revisions to the six-month data now show that spending increased by 1% while incomes increased just 0.8%. In other words, savings decreased, not increased, over the past six months. In addition, the restated income data would seem to imply that eventually some of the job growth in the period April through June will be revised sharply down.

Housing: 2014 was a rough year for existing-home sales, which now appear likely to fall from 5.1 million units in 2013 to 5 million units in 2014. However, the 2013 data was aided by a rush to close homes before interest rates increased. Slower investor sales, poor weather, higher mortgage rates, and a dramatic price spike all conspired to hit existing-home sales hard in 2014, especially in the early parts of the year. Now interest rates are lower again and the weather has improved some. Sales have moved up from an annual rate of 4.6 million units during the winter to 5.3 million units in October, which just about equaled the best month of 2013.

The pending home sales index, which often portends changes in existing-home sales, was off modestly, just 1.2%, from 105.3 in October to 104.1 in November. However, pendings growth is still ahead of existing- home sales, which means that we can probably expect more improvement in year-over-year existing-home sales. Looking to 2015, Morningstar economists expect existing-home sales to grow at a 6%–8% rate, which would mean about 300,000–400,000 more units than in 2014. That would bring sales to 5.3 million–5.4 million units for the full year.

On the positive side, home prices are growing at a slower rate. This trend, coupled with lower interest rates, should improve affordability, providing an essential boost to this so-far anemic housing recovery.

Employment Continues to Grow at a Slow, Steady Pace

Media and financial news sources often report that the economy added an “x” number of jobs for a particular month. These monthly payroll numbers are polled by the Bureau of Labor Statistics and are published in a report called “Employment Situation” that is typically released on the first Friday of each month. The monthly headline numbers tend to be quite volatile and are often difficult to interpret. In the past two years alone, the number of jobs added varied between as few as 88,000 jobs in June of 2012 to as many as 280,000 in February of 2013. Wide fluctuations in the monthly payroll data occur because the monthly hiring and firing process itself tends to be unpredictable, and seasonal factors that aim to stabilize the data are extremely difficult to measure accurately.

Looking at these figures can usually create more confusion than insight, and that is why Morningstar’s Department of Economic Analysis looks at employment growth through a slightly different lens. When the same volatile monthly jobs data is analyzed not as a monthly net job addition or loss but as a year- over-year 3-month moving average growth rate, a different picture emerges. All of a sudden, it becomes clear that the U.S. jobs market has been incredibly stable despite its monthly ups and downs. As the chart shows, total nonfarm employment has been growing at around 1.7% since early 2011 and has picked up modestly to 1.9% in recent months. Excluding the poorly performing government sector, which constitutes around 16% of total employment, private- sector jobs have been growing at an even higher 2.0–2.1% rate. Combine these results with efficiency and productivity gains and it should come as no surprise that the U.S. economy, on average, grew 2.2% since 2011 based on full-year estimates.

Despite the rock steady growth, the pace of employment recovery has been slow and disappointing to say the least. Considering that the U.S. economy lost over 8.5 million jobs between 2008 and 2010, most economists expected a much faster recovery of the labor market. Instead, it took more than four years to get back the number of jobs lost during the crisis. Seeing those numbers bounce back to their pre- recession level is great news, but it is important to point out that the make-up of the new post-recovery labor force has drastically changed. Unfortunately, the growth in high-paying, long-hours jobs such as construction and manufacturing has been all but robust, and due to efficiency improvements, especially in manufacturing, many of these jobs may never come back. A majority of the labor market recovery has been made in the lower-paying sectors such as retail and leisure and hospitality, which has certainly contributed to slower consumption growth and to the near-anemic pace of the economic recovery in general.

Pitfall: One of the big mistakes of retirement distribution can be not reinvesting RMDs you don’t need. Retirees may experience a situation where the amount they must withdraw from 401(k)s and IRAs for required minimum distributions can take them over their desired distribution threshold. The RMD rules require that people initially withdraw less than 4% of assets at age 70 1/2, but distributions can quickly step up into the 5%, 6%, and 7% range.

Workaround: What people might not realize is that there’s nothing saying they have to spend their RMDs; they can reinvest in a taxable account if they’d like that money to stay invested in the market. This can be a wise strategy for retirees who are concerned with legacy planning or long-term care needs down the line. It’s possible to build a taxable account that has many of the tax-saving features of a tax-deferred account.

401(k) plans and IRAs are long-term retirement savings vehicles. Withdrawal of pre-tax contributions and/or earnings will be subject to ordinary income tax and, if taken prior to age 59 1/2, may be subject to a 10% federal tax penalty. Funds in a traditional IRA grow tax-deferred and are taxed at ordinary income tax rates when withdrawn. This is for informational purposes only and should not be considered tax or financial planning advice. Please consult with a financial or tax professional for advice specific to your situation.