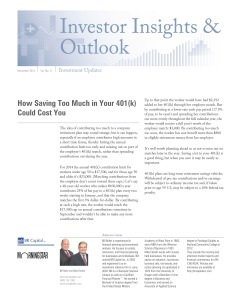 How Saving Too Much in Your 401(k) Could Cost You

The idea of contributing too much to a company retirement plan may sound strange, but it can happen, especially if an employee contributes high amounts in a short time frame, thereby hitting the annual contribution limit too early and missing out on part of the employer’s 401(k) match, rather than spreading contributions out during the year.

For 2014 the annual 401(k) contribution limit for workers under age 50 is $17,500, and for those age 50 and older it’s $23,000. (Matching contributions from the employer don’t count toward these caps.) Let’s say a 40-year-old worker who makes $100,000 a year contributes 25% of her pay to a 401(k) plan every two weeks starting in January, and that the company matches the first 3% dollar-for-dollar. By contributing at such a high rate, the worker would reach the $17,500 cap on annual contributions sometime in September and wouldn’t be able to make any more contributions after that. Up to that point the worker would have had $2,192 added to her 401(k) through her employer match. But by contributing at a lower rate each pay period (17.5% of pay, to be exact) and spreading her contributions out more evenly throughout the full calendar year, the worker would receive a full year’s worth of the employer match: $3,000. By contributing too much too soon, the worker has cost herself more than $800 in eligible retirement money from her employer.

It’s well worth planning ahead so as not to miss out on matches later in the year. Saving a lot in your 401(k) is a good thing, but when you save it may be nearly as important.

401(k) plans are long-term retirement savings vehicles. Withdrawal of pre-tax contributions and/or earnings will be subject to ordinary income tax and, if taken prior to age 59 1/2, may be subject to a 10% federal tax penalty.

Employment Continues to Grow at a Slow, Steady Pace

Media and financial news sources often report that the economy added an “x” number of jobs for a particular month. These monthly payroll numbers are polled by the Bureau of Labor Statistics and are published in a report called “Employment Situation” that is typically released on the first Friday of each month. The monthly headline numbers tend to be quite volatile and are often difficult to interpret. In the past two years alone, the number of jobs added varied between as few as 88,000 jobs in June of 2012 to as many as 280,000 in February of 2013. Wide fluctuations in the monthly payroll data occur because the monthly hiring and firing process itself tends to be unpredictable, and seasonal factors that aim to stabilize the data are extremely difficult to measure accurately.

Looking at these figures can usually create more confusion than insight, and that is why Morningstar’s Department of Economic Analysis looks at employment growth through a slightly different lens. When the same volatile monthly jobs data is analyzed not as a monthly net job addition or loss but as a year- over-year 3-month moving average growth rate, a different picture emerges. All of a sudden, it becomes clear that the U.S. jobs market has been incredibly stable despite its monthly ups and downs. As the chart shows, total nonfarm employment has been growing at around 1.7% since early 2011 and has picked up modestly to 1.9% in recent months. Excluding the poorly performing government sector, which constitutes around 16% of total employment, private- sector jobs have been growing at an even higher 2.0–2.1% rate. Combine these results with efficiency and productivity gains and it should come as no surprise that the U.S. economy, on average, grew 2.2% since 2011 based on full-year estimates.

Despite the rock steady growth, the pace of employment recovery has been slow and disappointing to say the least. Considering that the U.S. economy lost over 8.5 million jobs between 2008 and 2010, most economists expected a much faster recovery of the labor market. Instead, it took more than four years to get back the number of jobs lost during the crisis. Seeing those numbers bounce back to their pre- recession level is great news, but it is important to point out that the make-up of the new post-recovery labor force has drastically changed. Unfortunately, the growth in high-paying, long-hours jobs such as construction and manufacturing has been all but robust, and due to efficiency improvements, especially in manufacturing, many of these jobs may never come back. A majority of the labor market recovery has been made in the lower-paying sectors such as retail and leisure and hospitality, which has certainly contributed to slower consumption growth and to the near-anemic pace of the economic recovery in general.

Recent U.S. economic reports, while not always meeting expectations, suggested more of the slow and unsatisfying growth rates of the past four years. Businesses are looking and feeling more optimistic at a time that both U.S. and international consumers are sitting on their hands.

GDP: GDP numbers have been volatile lately, with wild quarter-to-quarter swings driven by inventory and export data. The overall growth rate for the third quarter came in at 3.5%, surpassing expectations of 3.1% growth and down modestly from the 4.6% rate of the second quarter. However, both those quarters represent a bounceback from a 2.1% decline in the first quarter. In other words, the recent strength is probably more of a catch-up than the start of a new, higher, sustained growth rate of 3% or more. Looking at the less volatile year-over-year data growth instead of annualizing one quarter of change suggests the economy is growing at 2.3%, just about in the middle of 2.0%–2.5% intermediate- and long-term growth potential of the U.S. economy.

Employment: The October employment report was below expectations but still consistent with trend-line employment growth of just under 2%. Nonfarm employment growth for October came in at 214,000 jobs added, below the consensus of 243,000 but roughly in line with the 12-month average of 222,000. This follows sharp growth of 256,000 jobs added in September, which was revised higher by 8,000 jobs. Government job growth, on the other hand, has been truly awful: The government has lost almost 1.1 million jobs since May 2010.

More interestingly, a lot of analysts are characterizing the current low-level job growth as unprecedented, a kind of new normal (which is another way of saying a new awful). But job growth, looked at year over year, hasn’t been all that much higher, at least for long, stretching all the way back to the 1980s. And some of those earlier periods had the benefit of substantial population growth to help push things along. The average job growth since 1980 has been 1.3%; currently it is running at 1.9%.

Hourly Wage Rates: Besides the raw employment numbers, it’s also important to look at the average hourly wage and the number of hours worked. Combining these can provide insight into consumer wage growth, the fuel for future spending. On a year- over-year, 3-month average basis, wage growth looks consistent at just about 2%.

Consumption and Income: Headline consumption data dropped by 0.2% in September following an unsustainable 0.5% growth rate in August. However, single-month growth rates are volatile and influenced by a variety of variables such as shifting seasonal patterns, weather, changes in tax holidays, and retailer big-event dates. Year-over-year data shows reliable consumption growth of about 2.4% on an inflation-adjusted basis.

Trade: Analysts had expected the trade deficit to widen from $40.0 billion to $41.5 billion. Instead, it widened all the way to $43 billion. Although averaging and inflation-adjusting the data paints a much less bleak pattern, it is still going to mean a downward revision in the third-quarter GDP estimate. Combining the new trade deficit report with a poor construction report probably means that GDP for the third quarter will be revised down from a great 3.5% to a more believable 3.0% rate. However, with inventory data and retail sales revisions yet to come, that GDP downgrade isn’t a sure thing just yet.

Also, falling energy prices in general and gasoline prices in particular should be a huge aid to consumers in the fourth quarter. Going into the last holiday season (2013), saving rates had moved up and gasoline prices had collapsed over the summer and early fall, similar to the set-up we are seeing in 2014.

Pitfall: One of the big mistakes of retirement distribution can be not adjusting withdrawals to account for market fluctuations. So-called sequencing risk—the chance that retirees may encounter a harsh bear market early in the life of their withdrawal program—can have a big effect on a portfolio’s longevity. Taking fixed distributions from a shrinking pool means that a retirement portfolio could suffer losses from which it would be impossible to recover.

Workaround: Maintaining a well-diversified asset mix may be a retiree’s best weapon for protecting his or her portfolio from a bear market. For example, holding assets in high-quality bonds and cash may allow a retiree to meet desired living expenses without having to withdraw from equity holdings during periods of market weakness. That said, the smartest retirement- distribution plans also make adjustments during times of market duress, possibly reducing withdrawals or, at a minimum, forgoing upward inflation adjustments.

All investments involve risk, including the loss of principal. There can be no assurance that any financial strategy will be successful. Asset allocation and diversification are methods used to help managed risk. They do not ensure a profit or protect against a loss. This is for informational purposes only and should not be considered tax or financial planning advice. Please consult a tax and/or financial professional for advice specific to your individual circumstances.

Commentary originally published by Robert Johnson, CFA, Director of Economic Analysis with Morningstar and has been modified for Morningstar Newsletter Builder.