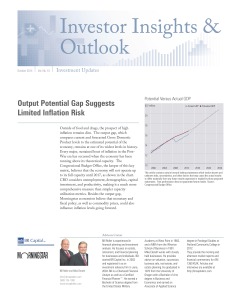 Outside of food and drugs, the prospect of high inflation remains dim. The output gap, which compares current and forecasted Gross Domestic Product levels to the estimated potential of the economy, remains at one of its widest levels in history. Every major, sustained bout of inflation in the Post- War era has occurred when the economy has been running above its theoretical capacity. The Congressional Budget Office, the keeper of this key metric, believes that the economy will not operate up to its full capacity until 2017, as shown in the chart. CBO considers unemployment, demographics, capital investment, and productivity, making it a much more comprehensive measure than simpler capacity utilization metrics. Besides the output gap, Morningstar economists believe that monetary and fiscal policy, as well as commodity prices, could also influence inflation levels going forward.

Active or Passive Strategies: How to Choose?

It’s one of the most important—maybe even the most important question—in the fund world. It is possible for investors to reach their financial goals using either approach, or by blending the two. Using an all-index portfolio is generally a low-cost, low-maintenance way to go. On the other hand, investors can also buy and hold active funds; the key is doing their homework and having the discipline to stick with their active managers through the inevitable rough patches.

Here is a quick review of some of the key attributes investors often seek, as well as how index and active funds deliver on each.

Low Expenses. Although not all index funds and ETFs have low costs, and not all active products are pricey, expenses on passively managed products are generally lower than the expenses of active funds. That expense advantage is a big reason that broad-market index funds have delivered solid returns versus market benchmarks over long periods of time in the past.

Simplicity/Ease of Use. Looking to build a minimalist, low-maintenance portfolio? It’s simple to do so by arriving at a target asset-allocation mix, then populating it with just a handful of broad-market- tracking index funds or ETFs. In contrast, by mixing and matching actively managed funds, investors may end up with overlap, and it can be difficult to maintain tight control over the portfolio’s asset allocation. Index-fund investors also don’t have to worry about operational issues such as manager departures.

Tax Efficiency. Although index funds and ETFs aren’t universally tax-efficient (bond index-fund investors may owe taxes on their income just as active bond- fund owners would, and some ETFs have socked their investors with big tax bills), broad stock market- tracking vehicles have tended to be pretty tax-efficient over time. Because active fund managers might trade more often, there’s a greater likelihood that an active fund will pass taxable capital gains on to its shareholders.

Ability to Outperform the Market. Index funds have, on average, delivered fine returns for their shareholders, with the majority topping their category peers’, sometimes by wide margins, over short and long time frames. That’s a huge selling point. But investors hung up on “beating the market” may not get there with index funds. If an index fund is properly tracking its benchmark, the return will be the benchmark’s return, minus expenses. Active funds, by contrast, offer at least the prospect of beating the market.

Ability to Adjust to Changing Market Conditions. One of the key potential benefits of an active approach is that a manager usually has the latitude to make changes based on market conditions. For example, he might decide to hold cash because stocks look expensive and he can’t find things to buy, thereby helping to protect investors if stocks sell off. Alternatively, a manager could take advantage of weak markets to load up on beaten-down securities that short-term investors have discarded. If an index-fund investor wishes to be opportunistic, meanwhile, she’ll have to do it herself.

Investors should bear a few caveats in mind before embracing an active fund for its flexibility and opportunism, however. Many active managers might not be all that active, and different managers have different skill levels in selecting investments. Finally, it’s worth noting that index-fund investors can easily add an element of active management by periodically rebalancing their portfolios.

Mutual funds are sold by prospectus, which can be obtained from your financial professional or the company and which contains complete information, including investment objectives, risks, charges and expenses. Investors should be read the prospectus and consider this information carefully before investing or sending money.

The U.S. market returned 8.3% so far this year (as of the end of the third quarter). The U.S economy appears to be holding its own despite setbacks in the rest of the world.

Employment: Private sector employment growth has been stuck in an exceptionally narrow range of 2.0%–2.2% year-over-year growth since 2011. As suggested by a falling unemployment rate (5.9%), recovery-low initial unemployment claims, and wage growth in select categories, Morningstar economists believe the economy may face spot labor shortages in 2015. That could mean that pay rates in some industries will need to go up. That could also pressure corporate earnings in the year ahead, along with rising interest rates and an increase in the trade-weighted dollar that has now appreciated by close to 12%. 2015 could be the first year when it might be better to be an employee than an employer.

Consumption and Income: For most of 2014, income growth has been excellent while consumption growth has been volatile and much slower. Between December and August real wages are up 3.1%, real disposable income is up 2.8%, and consumption a meager 1.4%. The premise and reason for optimism, at this point, is that incomes don’t grow faster than consumption for long in the United States. As
inflation backs down again and the job market continues to improve, consumers are likely to increase spending in the back part of 2014, which in turn should help push overall third-quarter GDP growth.

Trade: The trade deficit shrank from $40.3 billion in July to $40.1 billion in August. The inflation-adjusted deficits for July and August are running considerably lower than the slightly inflated numbers of the second quarter. Net trade took 0.4% off of GDP growth in the second quarter and is likely to add 0.2% in the third quarter, providing potential for a meaningful swing. Unfortunately, trade may hurt the U.S. economy in the fourth quarter because of a stronger dollar.

Quarter-End Insights: 2014 was to have benefited from a huge swing in the government category as well as a continued big rebound in housing and a strengthening world economy. That didn’t happen. Housing slowed because of affordability and credit tightness. Government did get a little better, but not nearly as much as hoped, as last year’s budget agreement weighed on spending. In fact, as fiscal 2014 draws to a close, federal government spending looks to be lucky to grow at 1%, before adjusting for inflation.

Furthermore, world growth has been a big disappointment. After just one year of mediocre growth, Europe didn’t show any growth at all in the second quarter. China, too, has been a disappointment, with both exports and real estate turning in poor results. China’s currency has been weaker, also, which has helped exports to the U.S. and hurt imports. The bright side to this surprising world weakness has been more liberal central banks, falling inflation rates, and lower interest rates.

Lately, there was some fear that in the long term, U.S. GDP growth could slip well under 2%. That is as overblown as the expected return to 3%-plus growth was just a few short years ago. First and foremost, residential spending has yet to return to its normal level (5% of GDP), despite population growth and five years of economic recovery. Exports to the rest of the world will also help keep the U.S. growth story afloat. Airliners are likely to be in strong demand throughout the world over the next 10 years. With long production and design cycles, competition for the U.S. airliners will prove minimal. Growing agricultural demand and growing oil-related exports should also keep the U.S. ahead of the developed world growth rates. Demographics, however, including lower population growth rates and an unfavorable shift to older, lower-spending consumers, may keep a lid on long-term economic growth.

Get a Tax-Smart Plan for In- Retirement Withdrawals

The following sequence may make sense for retirees to preserve the tax-saving benefits of tax-sheltered investments for as long as possible.

1) For retirees over age 70 1/2, the first stop for withdrawals are those accounts that carry required minimum distributions, or RMDs, such as Traditional IRAs and company retirement plans such as 401(k)s (to avoid paying penalties).

2) For retirees who are not required to take RMDs or have taken their RMDs and still need cash, turning to taxable assets may be an option. A good start may be selling assets with the highest cost basis first and then moving on to those assets where cost basis is lower (and the tax hit higher). Relative to tax-deferred or tax -free assets, these assets have the highest costs associated with them. However, taxable assets could also be valuable to tap in later retirement years because retirees will pay taxes on withdrawals at their capital gains rate, which is generally lower than the ordinary income tax rate.

401(k) and IRA plans are long-term retirement- savings vehicles. Withdrawal of pretax contributions and/or earnings will be subject to ordinary income tax and, if taken prior to age 59 1/2, may be subject to a 10% federal tax penalty. Direct contributions to a Roth IRA are not tax-deductible but may be withdrawn free of tax at any time. Earnings may be withdrawn tax and penalty free after a 5 year holding period if the age of 59 1/2 (or other qualifying condition) is met. Otherwise, a 10% federal tax penalty may apply. Please consult with a financial or tax professional for advice specific to your situation.