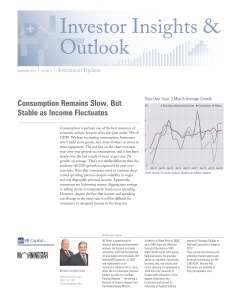 Consumption is perhaps one of the best measures of economic activity because of its size (just under 70% of GDP). Without increasing consumption, businesses won’t build more goods, hire more workers or invest in more equipment. The red line on the chart measures year-over-year growth in consumption, and it has been steady over the last couple of years at just over 2% growth on average. That’s not wildly different than the tendency of GDP growth as expressed by year-over- year data. Note that consumers tend to continue deep- rooted spending patterns despite volatility in wages and real disposable personal income. Apparently, consumers are borrowing money, digging into savings or selling stocks to temporarily fund excess spending. However, despite the fact that income and spending can diverge in the short run, it will be difficult for consumers to outspend income in the long run.

Longevity is often cheered as an achievement, but the downside of living well beyond one’s average life expectancy is that it can strain (or worse, completely deplete) an individual’s financial resources. The first step in addressing longevity risk is to evaluate just how great the odds are that either you or your spouse will have a much longer-than-average life span. Health considerations, family longevity history, employment choices, and income level may all be factors. If you’ve assessed these considerations and are concerned about longevity risk–or if you’ve determined that you’d simply rather be safe than sorry–here are three key mistakes to avoid.

Mistake 1: Holding a Too-Conservative Portfolio. When investors think about reducing risk in their portfolios, they often set their sights on curtailing short-term volatility—the risk that their portfolios will lose 10% or even 20% in a given year. But a too- conservative portfolio (one that emphasizes cash and bonds at the expense of stocks) can actually enhance shortfall risk while keeping a lid on short-term volatility. But, right now, interest rates have much more room to move up than they do down, which may reduce the opportunity for bond-price appreciation during the next decade. With such low returns, retirees with too-safe portfolios may not even outearn the inflation rate over time.

Mistake 2: Not Delaying Social Security Filing.* Because it provides an inflation-adjusted income stream for the rest of your life, Social Security is designed to provide you with at least some money coming in the door even if your investment portfolio runs low (or out) during your later years. If you file early (you’re eligible to do so as early as age 62), you permanently reduce your annual benefit from the program.

Delayed filing, on the other hand, has the opposite effect, amping up the value of your hedge. Not only will your benefits last as long as you do, but they’ll be higher, perhaps even substantially so, as well. Those who delay filing until age 70 may receive an annual benefit that’s more than 30% higher than what they would have received had they filed at full retirement age (currently 66) and more than 50% higher than their benefit had they filed at age 62.

Mistake 3: Not Adjusting Withdrawal-Rate Assumptions. Just as savings rates are the main determinant of success during the accumulation years (much more than investment selection, in fact), spending rate is one of the central determinants of retirement plans’ viability.

The 4% rule, which indicates that you can withdraw 4% of your total portfolio balance in year 1 of retirement, then annually inflation-adjust that dollar amount to determine each subsequent year’s portfolio payout, is a decent starting point in the sustainable withdrawal-rate discussion. But it’s important to tweak your withdrawal rate based on your own situation. If you have a sparkling health record and it looks likely that you’ll be retired longer than the 30-year withdrawal period that underpins the 4% rule, you may be better off starting a bit lower.

In a similar vein, it’s important to not set and forget your retirement-plan variables, such as your spending rate and your asset allocation, because retirement progresses and new information becomes available about your health and potential longevity, market valuations, and so forth. This is for informational purposes only and should not be construed as legal, tax, or financial planning advice. Please consult a legal, tax, and/or financial professional for advice specific to your individual circumstances. Asset allocation and diversification are methods used to help manage risk. They do not ensure a profit or protect against a loss. Returns and principal invested in securities are not guaranteed, and stocks have been more volatile than bonds.

The U.S. market was up 4.19% in August after a modest pullback in July. Some of the drivers of the stock market included monetary policy news from Europe as well a number of generally positive economic news out of the U.S. Europe: The ECB announced it was reducing several key lending ratesand raising the amount it charges banks leaving reserve balances at the central bank. It also revealed that it would be purchasing some covered bonds and asset- based securities. The details on the new programs were sketchy as to timing and amount. Although these were significant and unexpected actions, the ECB did not make the full move to purchase government securities in the area (so-called quantitative easing, or QE). Indeed, by charter, it would be difficult if not impossible for the central bank to buy sovereign debt, a move Germany strongly opposes. In the short run, all of these moves could modestly help the European economy. However, our economists fail to see how moving interest rates that are already so near zero by small fractions is going to change much. Programs to encourage lending, to be implemented shortly, could help slightly more.

Employment: The August jobs report showed employment grew by a puny 142,000 workers compared with the 207,000 workers added on average for the prior 12 months. The figure was well below the consensus of 228,000 jobs and even below Morningstar economists’ more modest forecast of 200,000 jobs. Our economists don’t view these results as reflective of the current state of the economy and the August jobs report seems inconsistent with other improving labor market indicators. Year-over-year, there-month averaged employment data showed that the private sector employment continued to grow at 2.1%, which is the pace that is consistent with 2.0-2.5% full year GDP growth.

Manufacturing: An array of U.S. manufacturing indicators released in August has shown that the sector is doing incredibly well. Both industrial production and Markit PMI indicated strong growth. U.S. automakers, particularly, are showing signs of strength as both production and sales have risen to 12.85 and 17.50 million units annualized respectively. It is important to note that while manufacturing typically reflects the state of the overall economy, its direct effects on GDP and employment are unfortunately limited, as it is now just a small part of the U.S. economy.

Housing: August was a strong month for the U.S. housing market as starts, permits, existing sales, and pending sales all exceeded expectations. Those great numbers combined with the moderating home price increases (slowing to 8.1% year over year growth in June, according to S&P/Case-Shiller Index) show that the housing market is poised for a health recovery. The slowdown in the price increases is, in particular, a positive development as slowly rising prices help to recover some of the underwater mortgages without drastically ruining affordability. Because of the rapid price increases we experienced throughout 2013, Morningstar economists expect that the price growth moderation will continue at least through the end of 2014.

Retail sales: Consumption is a very important part of the GDP report (about 70%) and often sets the tone for overall economic activity. Retail sales make up about a third of consumption. Excluding the auto industry, which is measured from manufacturers data (and not dealer retail sales), retail sales grew just 0.1% month to month after growth of 0.2% the previous month. Expectations were for growth to accelerate given better employment data. In fact, the consensus, excluding autos, was for growth of 0.4%. Therefore, Morningstar economists are a little suspicious of the July numbers. Weather was good, employment was good, and weekly chain-store sales had shown a marked improvement. Therefore, it is suspected that the July numbers will be revised or August numbers will appear to be unusually strong.

The Rising Cost of Not Going to College

A recent study from the Pew Research Center found that on virtually every measure of economic well-being and career attainment, from personal earnings to job satisfaction, young college graduates are outperforming their peers with less education. Moreover, the findings show that when today’s young adults are compared with previous generations, the disparity in economic outcomes between college graduates and those with a high school diploma or less formal schooling has never been greater in the modern era.

Millennial college graduates aged between 25 and 32 who are working full time earn about $17,500 more annually than their peers who only hold a high-school diploma. This pay gap was significantly smaller in previous generations.