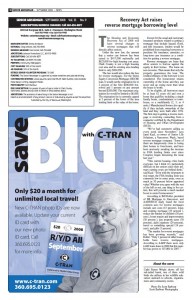 The Housing and Economic Recovery Act of 2008 will have several changes to reverse mortgages that will directly affect seniors.

Except for the usual and customary insurance products related to getting a mortgage that include hazard, flood, and title insurance, lenders would be prohibited from requiring borrowers to purchase life insurance, annuities, or long-term care insurance as a condition for getting a reverse mortgage.

Reverse mortgages are loans that allow seniors to borrow against the equity in their homes. The loans are non-recourse. That means that only the property guarantees the loan. The creditworthiness of the borrower is not considered. The homeowner retains ownership of the home and they can never end up owing more than what the house is worth.

To be eligible, all borrowers must be at least 62 years old and own a home that qualifies including a single family home, condominium or townhouse,           or a multifamily (2, 3, or 4 units.) Manufactured homes also qualify if they include ownership of the land and they were built after 1976. The first step in getting a reverse mortgage is receiving counseling from a counselor certified by the Department of Housing and Urban Development (HUD).

“We’ve had customers calling us every week since November,” says Janet Kaul, co-owner of Senior Life Solutions, a Vancouver, Wash., based reverse mortgage company. “Some of them are dangerously close to losing their homes to foreclosure, and have been anxiously awaiting the increase in FHA lending limits ever since Congress began discussing the issue last year.”

“This current housing crisis hurts everyone, but I think it’s particularly difficult on the seniors since their primary earning years are behind them,” said Kaul. “Even with the downturn in real estate, the FHA lending limit was extremely low in some areas, even as much as 50 percent below appraised value! Whether you agree with the rest of the bill or not, one thing is for certain, this will provide a much needed boost to senior homeowners.” According to Bill Roller, president of BR Mortgage in Vancouver, a AARP/HUD study found the most common uses for reverse mortgages include care costs (67 percent), repay an existing mortgage (55 percent ), reduce the burden on children (50 percent ), home repairs and improvements (50 percent ), pay property taxes (38 percent), daily expenses (29 percent), travel or something special (14 percent), and gifts (3 percent).

“The market for reverse mortgages has been growing recently,” said Roller. “Only 1 percent of older households have reverse mortgages.  According to AARP there were only 6,600 loans done in 2000 but this number has grown to 107,000 in 2007.”